If you’ve seen Episode 14 of The Walking Dead’s 11th season on AMC+ this week, you might be trying to remember who that badass woman is at the end. Maybe you remember seeing her before, but you can’t quite place her face. Or maybe you remember her, but you want to know more about her place in the overall storyline. Luckily, I’m here to help.

Warning! This article contains major spoilers for much of The Walking Dead’s Season 10 and 11. In the final scene of Episode 14 of Season 11, we see a woman slitting the throat of a Commonwealth soldier while other dead soldiers lie around. This woman is Leah and not only was she a main antagonist earlier in the season, but she was once Daryl’s love interest in Season 10.

So let’s start with the actor herself for those of you who might be trying to place her face. Leah is played by Lynn Collins, a Texas-born Shakespearean stage and screen actor who started her career in an episode of Law & Order: Special Victims Unit in 1999. She might be most well-known for her role as Kayla Silverfox in X-Men Origins: Wolverine, but she also starred in The Number 23 with Jim Carrey and as the recurring character Dawn Green in True Blood.

As for Leah, we first saw this character in Episode 18 of Season 10 during a flashback scene. She was surviving in a forest cabin when Daryl stumbled upon her (and the business end of her shotgun) while he was out looking for Rick.

The two (three if you count her dog, Dog) eventually bond and Leah and Daryl become romantically involved. And that’s a tough sell for a guy who has been nothing but a hardass since Day 1. While he has shown friendliness to potential suitors like Carol and Connie, Leah is the first character who has broken down Daryl’s walls and allowed him to show vulnerability. This was a big deal for the show’s biggest heartthrob whom many thought would surely end up with Carol at some point.

As for Leah’s backstory, we know that she fought in Afghanistan with other members of the Reapers and had adopted a boy named Matthew at some point when his mother died.

Leah and her military buddies survived in rural Virginia for about a year together after the zombie apocalypse began. When the camp was overrun, she escaped with Matthew and Dog’s mother, but Matthew was bitten and she knew she’d have to put him out of his misery. That day when Matthew died, Dog was born.

Leah and Daryl’s relationship took several months to develop as Leah didn’t even tell him her name for the longest time. But after more than a year, their hearts were a-flutter and there was love in their eyes.

Leah eventually became frustrated at Daryl’s long trips away from her as he continued his search for Rick. She even gave him the ultimatum: keep looking for Rick or stay with her. But as he thought it through (on a scouting trip for Rick), he returned to find the cabin ransacked and Leah missing. He left a note for her that said “I belong with you. FIND ME” in case she returned, but when the scene flashes back to modern day, we see Daryl realizing that she never did come back and never saw his note.

Now at the beginning of Season 11, we see the return of a masked Leah (unknown to fans at the time) running with the Reapers, who were the main bad guys in that first part of Season 11. Leah and Daryl eventually get some alone time to talk out what happened at the cabin. Daryl lets her know for the first time that he did come back for her but she says that the Reapers are her military family from Afghanistan and they’re where she belongs now.

This goes back and forth a few times with Leah proclaiming her allegiance to the Reapers, but then showing that she still had very serious feelings for Daryl. It was a tough situation because Daryl had infiltrated the group to destroy the leader, Pope, and Leah was on to him.

Woo hoo, look who’s back om track !!! Hello Leah
Happy to see you back in #TWD @lynncollins7 Hope your character survives in the end or at least to the finale. Crossing my fingers for you pic.twitter.com/uNQd2XjaYs

Leah and Daryl eventually build up a smidge of trust again and they hash out a plan that is unexpectedly skewed when Leah shoots Pope herself.

In Episode 9, Leah’s group is overrun by Maggie and Gabe and they reach an agreement to let Leah, Boone, and Washington escape. But when they turn to slowly walk away, Maggie decides that she doesn’t like that plan after all and shoots Leah in the shoulder.

Leah does escape, but not before Daryl gets in one last word about how he wishes things were different.

Fast forward to Episode 14 and we see Leah at the end of the episode, taking down Commonwealth troopers. This scene reveals that Leah is actually the one who took the Commonwealth’s gun shipment, which was erroneously blamed on the Riverbend group in Episode 13. The bullet wound in her shoulder looks healed up and there appears to be a level of rage in her eyes. 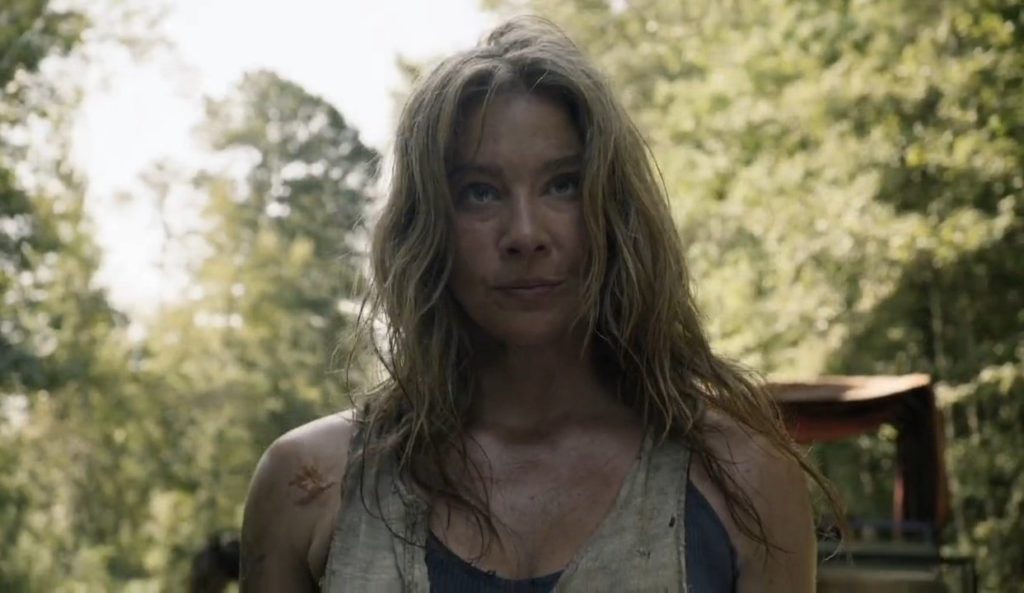 What’s interesting from this point is that IMDB shows Leah appearing in Episode 16 and Episode 20 of this final season. Episode 16 will be the finale for this current chunk of episodes that will end in April, but we probably won’t see Episode 20 until late 2022 or even 2023.

So what are your thoughts on Leah? Will she use her newly acquired guns to get revenge on Maggie? Will her flame for Daryl become rekindled? Will she live long enough to appear in one of the many TWD spin-offs?