In fact, Our top #1-8 are no longer on Netflix, just one year after publication.
We’re just as mad at you are. We said goodbye to a lot of good movies on Netflix last year, and said hello to a few good ones. To see what you can watch right now, check out our updated 2017 Top Ten list here.

We looked through every single post apocalyptic movie on Netflix to find you the best of the best. If it’s about species survival or the end of the world, and it’s good, we probably have it listed here.  It’s true that Netflix has dropped a lot of good post apocalyptic shows (personal outrage list at the end), but you can still find some great end-of-the-world cinema for instant streaming. Below you’ll find the top 10 post apocalyptic movies you can watch right now on Netflix followed by an indiscriminate list of all the movies in the post apocalyptic genre that Netflix has available. At the end, I’ve added a list of shows I found on my Netflix “viewed” list that are now unavailable for streaming. #BringThemBackNetflix because there are some really good shows on that list.

NETFLIX RANT: Is it crazy to think we could just pass a law to give all copyright ownership to Netflix? Then they could stream everything. Yes. It is crazy. And it would never work. But seriously, I do hope that happens, but in a less coerce-y way. Like with legit buyouts and acquisitions, where 21st Century Fox becomes a subsidiary of Netflix. Or, in the converse, I’d simply appreciate if the rest of the content holders would get their streaming game in order. Give me a reasonable subscription model and open the entire vault for streaming. Then people will stop praying that Netflix acquires you. Bravo to HBO, btw, who actually did something like this. HBO – we’re good. You just keep being you.

DISCLAIMER: This list was made on February 3 2016, and it may not be accurate the very next day. That’s because Netflix is constantly changing their catalogue. In fact, they pulled The Terminator while I was writing this article (and lost a respectable #3 spot, I might add!) BUT I’ll keep this list updated all year, so if you see something good on Netflix that I don’t have; please let me know about it in the comments, via email, or in the web form on our Tips page. And come back to this page periodically to see a current list (until the 2017 list is published). 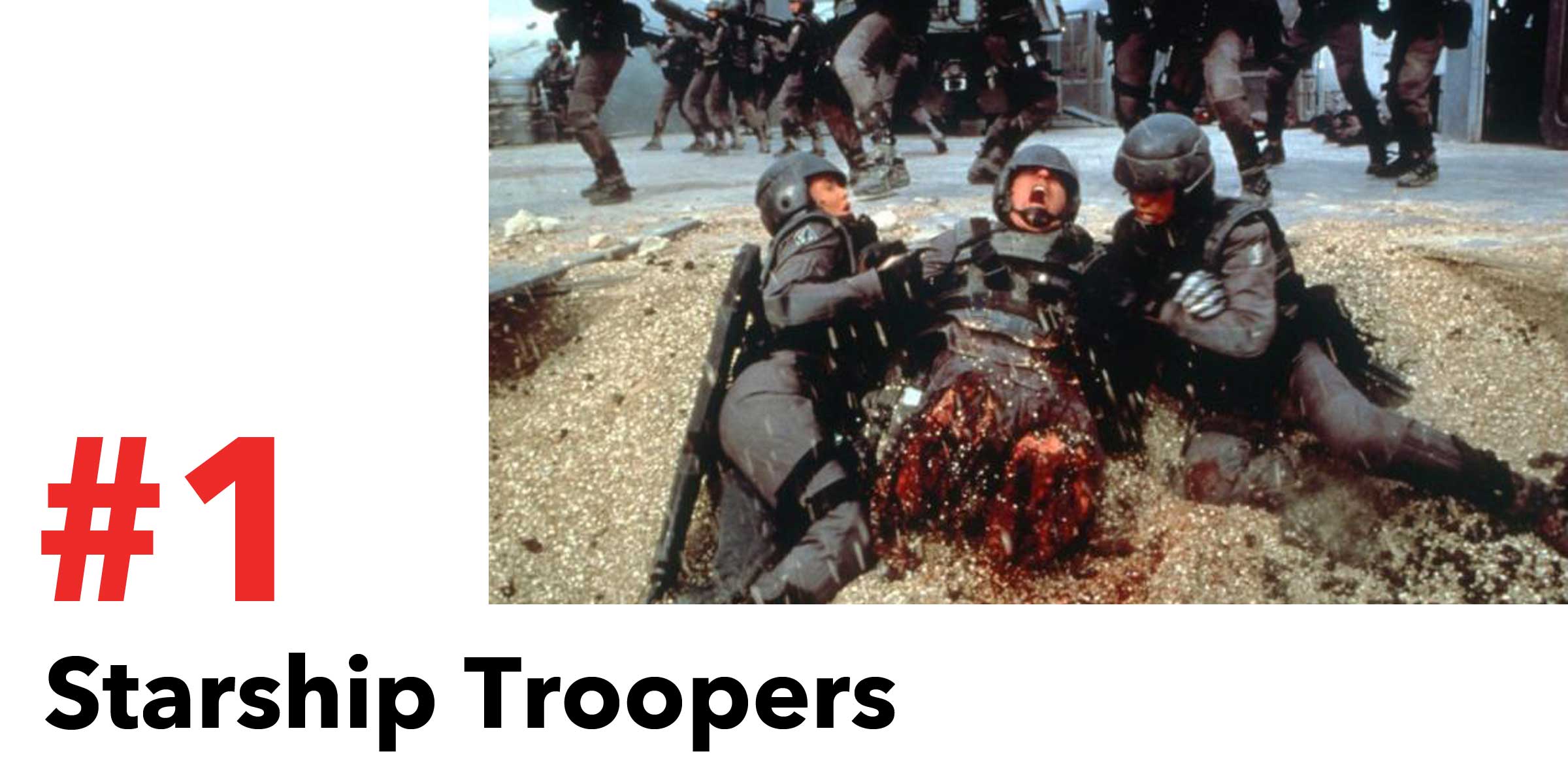 Released in 1997, this dark vision of the future asks what humanity would be like if our very survival were on the line. Earth has recently been attacked by an insect-like alien, killing billions. Now it’s time for Earth to strike back – and it won’t be pretty. I love this movie for its dark commentary about the horrors of war. Before V for Vendetta and Divergent, there was an even better movie about thought-police controlling the world. Equilibrium features great visuals, a solid story, and good acting – though I can’t decide if the martial arts are cool or kind of cheesy. The Matrix is about machines who rule the world and enslave humanity. But what events led to that? You’ll need to watch the Animatrix to find out. So… what caused the machines to flip out and kill everyone? Hint: We weren’t being kind to our sentient robot friends.

I know what I’m doing this weekend. Have you ever wanted to see corporate executives hunted down and brought to bloody justice? How about Gary Busey hanging out in a post apocalyptic world? Then you’re in for a treat. Bounty Killer takes place in a Mad Max-like wasteland where hunting and killing shady businessmen can make you rich. What if everyone in the remaining population of the entire world were on a train? And what if some of the people on that train started acting like jerks? That is the question that Snowpiercer seeks to answer. Think of it as Speed meets Mad Max. Sound weird? The 95% Rotten Tomatoes rating below is the best score on this list. When the virus breaks out in State of Emergency, the military wisely decides to quarantine the whole mess. But what happens to the non-zombies who get stuck inside the quarantine? Big brother and I actually agree on the answer to that question: they’re on their own. You don’t need to know the Halo backstory (which is incredible) to enjoy this film. But I’ll give you the short version: In the world of Halo, humanity is in an all-out war for survival against an alliance of several powerful alien races. This isn’t the first rodeo for these killer aliens, but humanity is putting up quite a struggle. With the help of machine-augmented super-soldiers called “Spartans”, and sentient AI, we just might find a way to survive. Unfortunately, Earth only has one Spartan left…

The world needs to know about Master Chief. I think you’ll agree that nuclear annihilation is the most likely of all doomsday scenarios. Oppenheimer, when reflecting on his role in creating the atomic bomb, quoted the Bhagavad-Gita, “Now I am become Death; the destroyer of worlds.” He may yet be proven right. Watch this for all the gory details, and the after effects, of that first nuclear attack. In Seeking a Friend for the End of the World, Steve Carrell and Keira Knightley travel a world filled with people who have nothing left to lose. The world is going to end when a comet strikes the Earth, and everybody knows it. Meanwhile, our protagonists have some unfinished business.

If you’re still hurting for post apocalyptic movies, then have no fear. If it’s a movie about the end of the world, and it’s on Netflix, it will be in this list. We’ve looked through the entire catalogue to make sure we didn’t leave anything out. Except Armageddon. Because you’ll get that damn song stuck in your head. And it’s a terrible movie. But, yeah, Armageddon is on Netflix too.

While writing this, I decided that a good place to start would be browsing my own Netflix history – which amazingly went back to 2009. It was fascinating, but also a bit depressing to see how many post apocalyptic movies and tv shows that Netflix has dropped. I think you’ll agree that our Top 10 list would look a lot different if these titles were still available. In my opinion, 8 of the top 10 movies on this page are in the list below. Remember, this is just from my own view history, so there’s probably way more than this.

Post Apocalyptic Media is blowing the lid off the Netflix-dropping-good-movies scandal.


Did we miss something?

Tags: netflix
No event found!
Load More
Subscribe To Our Calendar With Your Google Account
Select And Add Upcoming Events To Your Phone's Calendar