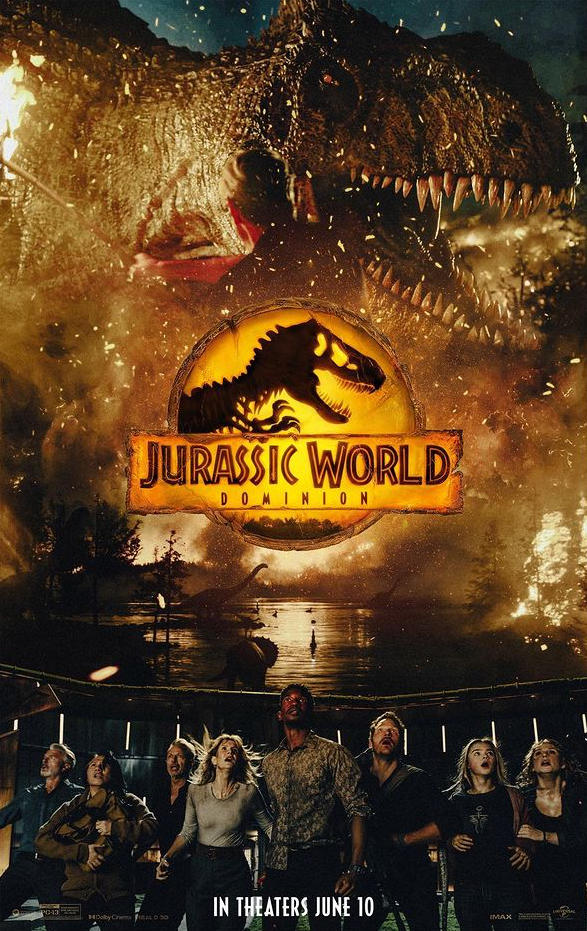 This is a non-spoiler review of the movie Jurassic World: Dominion (released in theatres June 10, 2022, directed by Colin Trevorrow).

But first: is Jurassic World: Dominion a post-apocalyptic film? You might think so from the trailers, what with the images of dinosaurs running amok, but no, the movie is not post-apocalyptic. It’s a movie about averting an ecological apocalypse and not one caused by the dinosaurs.

I want to preface my review by saying I went into the movie with no preconceived ideas about it. I didn’t read any other reviews or even watch the entire trailer. I will also say that when it comes to the franchise, I am a hardcore fan—Jurassic Park is my favorite movie, I own swag, I’m always showing off my fancy Folio Society version of the book, I watch Camp Cretaceous without any kids with me, and I had a Jurassic Park-themed wedding. So, it would have taken a lot to make me dislike this movie.

That being said, I’m not blind to Jurassic World: Dominion’s flaws. It is severely lacking in logic. Creative liberties are taken with science (DNA specifically), distance (people get places extremely quickly in this movie), convenience (everything and everyone are located very close together despite the massive facility most of the movie takes place in), and electrical systems. There were many times when I said out loud in the theatre, “What?”

Yet, these issues didn’t stop me from whole-heartedly enjoying this romp of a film. There are parts that are … stupid (Chris Pratt’s Owen Grady roping a dinosaur three times the size of a horse by hand), but there were also parts where I was on the edge of my seat and times when I laughed heartily.

While the movie’s pacing is rather breakneck, as it has to follow four or five plot lines that converge and bisect throughout, the action scenes are not repetitive. There’s an excellent car/motorcycle chase scene in Malta, some airplane-related escapades, the (as expected) escape from a facility, some scenes in the outdoors (both arctic and jungle), and a few moments of horror harken back to the original movie. Not all of the action scenes involve dinosaurs, but most do. What I really liked was that it’s not the same dinosaur harassing the characters over and over; the team has a variety of dino threats to contend with. Yes, there is a lot of, to quote Ian Malcolm in The Lost World, “running and screaming.” But if you go into a Jurassic Park movie and are annoyed by this, I think you only have one person to blame (spoiler alert: yourself).

One thing contributing to the quick pace is that, like the expanded-universe Marvel movies, we don’t need to spend the first third of the film on character exposition. Everyone except for Kayla Watts (played by DeWanda Wise) we know from previous films, even Dodgson, the villain.

When it comes to Dodgson, his motivations are a mix of being unclear and stereotypically Machiavellian. This villain factor is one reason we’ve never been able to regain the magic of Jurassic Park in subsequent films: they either gave us no human villain (the spinosaurus in JP3 and the Egnonimous Rex in Jurassic World) or greedy businessmen (The Lost World, Fallen Kingdom). John Hammond (in Jurassic Park) is a misguided, eccentric dreamer who ultimately realizes his failings. He’s complex. While having a few quirks, Dodgson, by comparison, falls solidly into the greedy businessman trope. This turns what could have been a poignant warning about the fragility of ecosystems into just another “escape the park” movie with a villain we’ve seen many times before.

Speaking of escaping the park, the movie tries to choke you with nostalgia. But, rather than being painful, it’s pretty fun. As I said before, I am a super fan of Jurassic Park. For me, while the nostalgia was as obvious as a velociraptor’s claw tap-tapping on a tile floor, I loved it. I picked up on every reference, joke, allusion, and throwback (and there are a lot). The ten-year-old girl in me who wanted to be Ellie Sattler as a kid melted when Laura Dern made her first appearance, and I had a grin on my face during every scene with Ian and Alan. Even Biosyn (Dodgson’s company) is a reference to not only the book but the 1993 SEGA game. It’s clear Colin Trevorrow (the director) is as big a fan of the original franchise as I am.

Overall, if you’re expecting a post-apocalyptic movie where dinosaurs have inherited the earth, this is not that. If you’re expecting a nuanced take on cloning, this is not that. It is, as the series has always been, a movie about genetically modified dinosaurs. It’s inherently ridiculous, which critics seem to have forgotten in their less-than-favourable reviews of what is a sci-fi action movie with entertainment as its goal.

If you’re looking for a fun, action-packed movie with over-the-top characters, call-backs to the original film, and fun dinosaurs (including some adorable baby ones and some horrific ones), then you will enjoy it. I had an absolute blast.