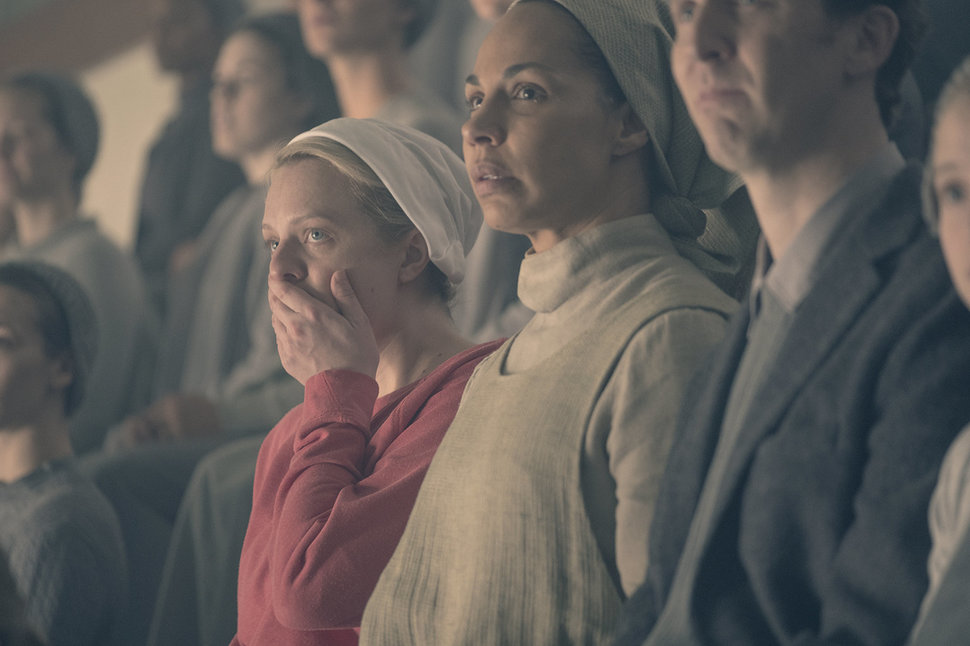 We’re just nearing the end of Season 2 of The Handmaid’s Tale, but we have a better idea now what the Republic of Gilead looks like, and how it relates to the United States and Canada. (If you haven’t seen The Handmaid’s Tale, you can watch Season 1 here. Or check out the book the series is based on here.) If you want to see the most accurate map that we have so far of Gilead, scroll all the way down to the end of this story and view the last map, or read the entire last section about the finale map and a map seen at an official finale watch party. This article was originally written after Episode 11, but has been updated now that we’ve seen the finale. The newest map from the finale is at the very end, with even more information and details.

Now back to the good stuff… What does Gilead look like? Season 2 has dropped a few more hints, and we’ve even gotten to see the outside world more. An attempt was even made to woo Mrs. Waterford away when she visited Canada.

Quite a few fans have created maps of their own, based on hints dropped in the series. And now that Season 2 Episode 11 has aired, we have a much better idea of what the world is looking like. So let’s start out by looking at what was revealed from those posters on the wall during Season 2 Episode 11.

This looks like it’s a view of Gilead’s growth over time. Perhaps the far left is where it first started, the center map is now, and the far right is where Gilead is headed. Or the far right might indicate that Gilead has pretty much taken over all the U.S. now, but some areas are more loyal than others. Here’s a closer look at those first two maps, lightened:

And next is a super fuzzy closeup of Map 3 that won’t help much, but it basically looks like Gilead is totally taken over. The map above shows different shading, which might indicate loyalty levels or levels of occupation. But it’s also possible that some of the shading has something to do with those uninhabitable colony areas. Thanks to Redditor Rollen73 for the map above.

Remember, in Season 1 we learned that there are only 2 stars left on the American flag.

Some things that we know:

An important fact to remember is that rebellions continue, even in areas that Gilead controls. In general, it appears that the East Coast is mostly fully under Gilead’s control, and the rest is a bit of a guessing game. A big chunk of the U.S. is also now radiated no man’s land (aka colonies) and this might be in the midwest area. I’m going to guess that the far left all-red map is what Gilead hopes to become, and the middle map is more of a present-day Gilead.

So now that we’ve explored some details, it’s time to dismiss one map that seemed credible at first. This first map is based more on the books. It’s from the forums of AlternateHistory.com and was created by user Medibee, and the Gilead flag was created by Monkeyflung. This was created back during the beginning of Season 1. It’s really not all that accurate anymore though, based on what we’ve learned more recently. For example, it shows California as one of the nuke zones, and we know from Eden’s comment in Season 2 that this is not accurate according to the show. This is the map that’s since been debunked. (But if you’re reading the book, it’s accurate):

Here’s a closeup of what Gilead appears to be now. (Sorry, it’s fuzzy):

Redditor marketgarder created her own theory, before Episode 11 aired, and it was surprisingly close to what we saw. Here it is below: 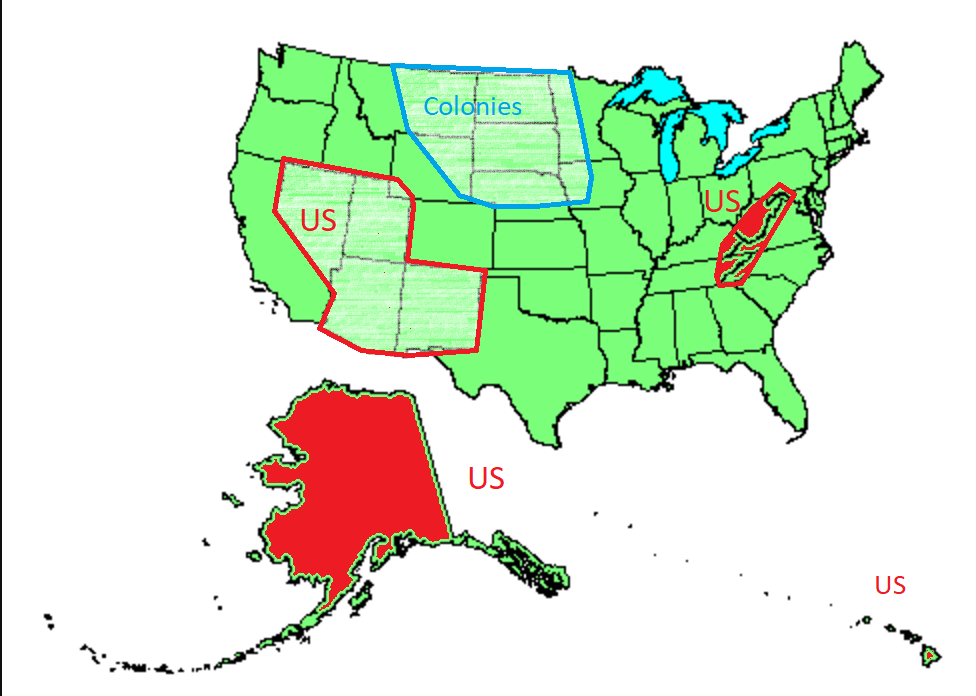 Marketgarder’s proposed map was based on details from the show, along with observations of religions and culture and firearm ownership. Very close to what we saw in Episode 11, in many ways (except missing that California is under Gilead’s control.)

After Season 2 Episode 11 aired, Redditor mess_is_lore redrew the maps for clarity, as best they could determine. What might be missing is shading, which some fans think they saw. This is likely the most accurate at the moment, with the third map likely being the current one and the fourth map being the goal:

But for your ease, we’ve created our own Gilead Map based on Season 2 Episode 11. Once again, it’s based on the assumption that the third map from the episode is the accurate one. This is courtesy of MapChart, which you can use to quickly create your own map too.

My conclusion is that Gilead doesn’t nearly hold as much territory as they claim, and a lot of it (aside from the East Coast and parts of California) is disputed. Gilead is a master of propaganda, so of course they are lying to their own people about how much they own. We saw how they lie to Canada about how the women are treated. Of course they’re lying about how powerful they are.

Welp! That’s interesting. Mr. Waterford had a completely different map in front of him at the end of the Handmaid’s Tale finale!

It’s strange how different his map is from the one that June saw two episodes earlier. It makes me wonder if Gilead has the propaganda map they share with citizens and then the real map that Waterford is looking at. I’m going to dig into this map in more detail, so please come back to this article soon for more!

Did you notice the nuclear signs on the map? There’s an even BETTER map if you want to see it. It’s incredibly similar to the map above, but it was shared by Redditor hashtagtruthbomb after attending the finale in LA.

And an even clearer one shared by Redditor tyrell_m. It may have originated from this tweet:

Zooming in on the legend, it looks like the green areas (and the areas marked with nuke signs) are “Atomic Wasteland.” Then there are areas outside of them marked “hazardous risk zone.” The orangey areas are marked “rebel occupied area.” So you can clearly see that Gilead controls the blueish areas in northeast, which are marked New Gilead District, the Eastern District, the Atlantic District,  the Midwest District, and East Central District. Then the pinkish areas are also Gilead controlled: Northwest district, Northern district, Southern district, Gulf district, and South East district. Then there are the yellowish areas on the map, which are colonies: Eastern Colonies District, Western Colonies District, and Southwest District. And it appears the black dots are Gilead military bases, which could explain how they were able to get oranges from Florida.

Creator Bruce Miller talked with The Wrap and said, “Yes, Gilead has taken over the continental U.S., so all 48 states of the continental US. There’s lots of areas that are not nearly as well controlled as the Boston area, where the movement was very strong… Alaska and Hawaii are the United States, the two states that are united still. And the rest of it has turned into Gilead with lots of pockets of resistance and unease and the places where the grip of Gilead is not nearly as firm.”

The map seen during the finale’s premiere in LA sheds more light on the map that Waterford was looking at and which we saw on TV. The deep red areas are rebel-controlled. Pink is controlled by Gilead (but I guess maybe a different faction of Gilead than the one Waterford is part of?) The yellow areas are colonies, blue is another Gilead controlled area (by people Waterford is connected to or Waterford himself.) Look at it again with that in mind:

(Side note: Before we sign off, let’s get a few things out of the way. Some might argue whether The Handmaid’s Tale is truly post-apocalyptic, since much of the rest of the world is still just fine. Well, there are a few arguments to be made. Post Apocalyptic Media sometimes covers near-apocalyptic or dystopian shows with a post-apoc feel. We’d also argue that in the United States, there’s certain an apocalyptic/post-apocalyptic feel to the country. The country’s been torn down and there have been at least some nukes used — see the colonies. We think it’s close enough to warrant a closer look on our website.)

Offred *
$2.99
(As of: 2022/07/03 5:23 am - Details
×
Product prices and availability are accurate as of the date/time indicated and are subject to change. Any price and availability information displayed on https://www.amazon.com/ at the time of purchase will apply to the purchase of this product.
)
View now *
(* = affiliate link / image source: Amazon partner program)

The Handmaid's TaleTV
Previous Article12 Monkeys Season 4 Recap & Review: In Episodes 4-6, Family & Philosophy Matters Near the EndNext ArticleWhen Is Salvation Season 2 Episode 3 Airing? Why Are Trump & NCIS on Instead?

Tags: The Handmaid's Tale, TV
No event found!
Load More
Subscribe To Our Calendar With Your Google Account
Select And Add Upcoming Events To Your Phone's Calendar