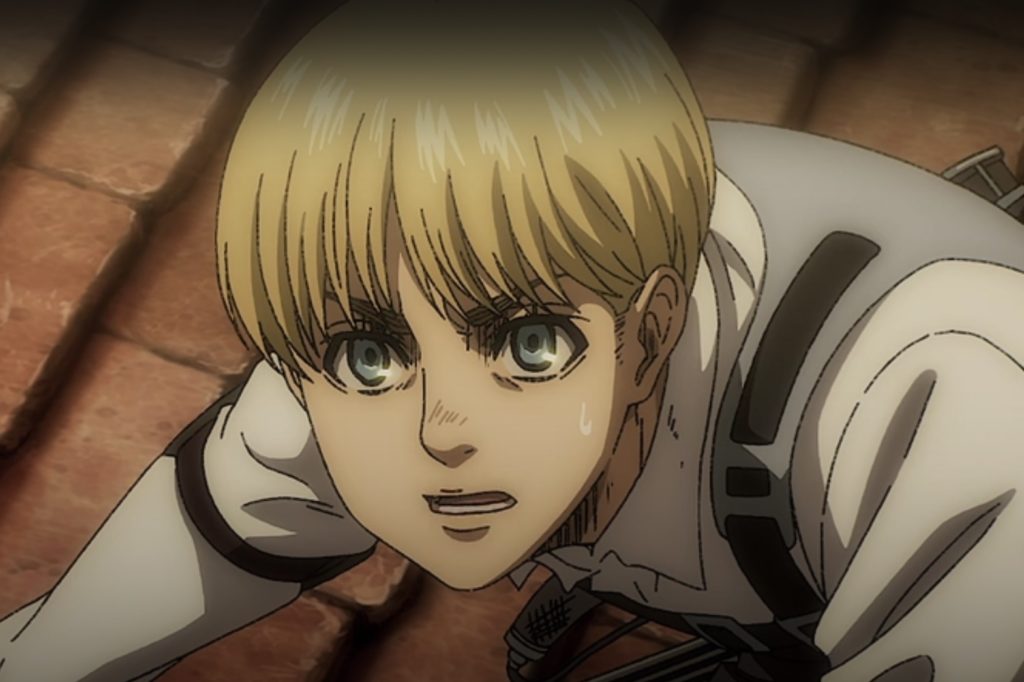 Alert viewers who watched Attack on Titan Season 4 Episode 19 might have noticed that we had a brief appearance from an Armin with glasses (whom some refer to as “Nerd Armin”) and a “Goth Mikasa,” along with a sauna scene notorious among manga readers. These particular “flashbacks” were actually inside jokes for manga readers and not really canon. And manga readers can’t contain their excitement. Here’s what it all means.

This article will have spoilers for the newest episode, but the article itself is manga-spoiler-free (except for explaining the Nerd Armin and Goth Mikasa scenes.) For anime-only discussions, join us on Discord or in our AoT Facebook page.

Why Did We See an Armin with Glasses & a ‘Goth’ Mikasa in Eren’s Memories?

After Eren is shot by Gabi, he has a flashback memory sequence revealing a lot of his past memories and some memories from predecessors who had his Titans. But hidden among those is a memory of Armin wearing glasses and Mikasa with a very different hairstyle. Manga readers are referring to these as “Nerd Armin” and “Goth Mikasa,” and they occur at around 15:50 on Hulu (which should be at a similar time for other streaming platforms like Funimation and Crunchyroll.)

There’s a lot of hidden meaning to Eren’s memory sequence that’s important to the series (read more in our story here.)

But Goth Mikasa, Armin with Glasses, and that Zeke Sauna scene are not among the canon scenes that are important to the series. These scenes were made simply to be fan service for manga readers (and a callout to them was included in the manga itself at this same point too.)

Those scenes are actually based on a fake high school parody series that’s included in more recent issues of the manga. Hajime Isayama often puts funny fake previews at the end of some of his manga issues. They’re just fun little stories that are not canon and are meant to get a laugh. He’s done some about a fake high school story involving Armin, Mikasa, and the others.

On Reddit Edwin5302 explained: “At the end of each manga volume Isayama puts a couple pages of a high school parody of attack on Titan, they are Armin and Mikasa from that parody.”

This wasn’t just part of the anime though. Isayama included it in the manga scenes from this same flashback scene too.

There are some Reddit threads dedicated to their appearance.

Did anyone else catch Mikasa, Armin and Historia from the Highschool spin off and also Reiner, Levi etc. in the sauna. from ShingekiNoKyojin

Redditor u/Lesbrasdemer responded: “YES THANK YOU! I screamed when I saw it, wasn’t sure if I was correct, I knew Reddit was gonna give me some answers haha.”

Here’s what that fake sauna scene looks like, as shared by u/Soft-Comfort-7474.

We see it briefly in the flashbacks too. One person wrote: “No one can escape this!! They animated Gothkasa and Nerd Armin for HS Castes AU holy fck!?????? #AttackOnTitan”

No one can escape this!! They animated Gothkasa and Nerd Armin for HS Castes AU holy fck!?????? #AttackOnTitan pic.twitter.com/NClKrKCKjJ

For such a heavy episode, it was nice to have a lighthearted moment like this.

isayama was definitely at mappa hq like this making sure goth mikasa and nerd armin were animated pic.twitter.com/u3cRvTBZHO