In Season 4 Episode 19 of Attack on Titan, there was one moment when Eren flashed back and saw a lot of memories in quick succession. Here’s a look at what he saw.

This article will have MAJOR spoilers for the newest episode, Season 4 Episode 19, but the article itself is manga-spoiler-free beyond this episode. For anime-only discussions, join us on Discord or in our AoT Facebook page.

Here Is Everything Eren Saw Before He Entered the Coordinate/Paths

The scene started at 15:50 on Hulu, so on other streaming platforms it will begin right around that time too. The scene happened right after Eren was shot by Gabi and may or may not have died. (We’re still waiting to find out what happens to him in the real world after his scenes with Zeke.)

But before he woke up in the Path and saw Zeke, Eren had a sequence of memories.

The very first thing he saw was Mikasa as a child. Does this mean that Eren truly does love Mikasa, just like she loves him?

The rest of the scenes aren’t in the order they happened, as we got screenshots randomly as we could find them. But these are the majority of the scenes.

There was a weird scene where we saw Armin in glasses (some referred to this as “nerd Armin”) and where we saw a Goth Mikasa.

Those two above photos aren’t necessarily canon. They’re created by MAPPA as fan service pointing to the Attack on Titan High School “fake preview” that was included in one of the mangas. The mangas often have joke “fake previews” that aren’t canon, but just included for fun.

I think this character below is Historia but I’m not certain:

We see a scene of a bird flying free over the wall. This has been a recurring theme, most heavily scene with Eren and with Falco.

This is the moment when Grisha was begging the Royal Family to stop the Titans, but they wouldn’t. So he stole the Founding Titan for himself and killed Rod’s children.

I’m not sure who the person below is… Looks kind of like Armin but not exactly.

This scene below (that’s Levi on the far left) is another “fan service” moment pointing to a joke preview in a manga, I’ve been told. Eren flashed back to the Colossal Titan looking over the wall.

I think this is a memory from one of Eren’s Titan’s previous forms. Maybe Zeke as a child or Grisha as a child? It went by fast, so it was tougher to tell.

This is a scene when Connie was fighting Sasha over a potato.

Mappa tweeted about the scene above.

MAPPA wrote (in the English translation): “The original drawings of Sasha and Connie from the training soldier era are released. Next time, Episode 79 “‘Memory of the Future’ Please look forward to it!”

I’m not sure who we’re seeing in this flash below. Levi perhaps?

Below is Grisha’s younger sister, who was killed by the Marleyans. 🙁

Eren also flashed to when Reiner was begging his forgiveness:

And here is the entire Reiss family before Grisha fought Frieda and killed them all. So not everything Eren saw in his memory flashback was from his own life:

Here we see what appears to be Falco right after the Connie/Sasha scene. Eren had interacted with Falco a bit and got him to mail letters for him.

Armin is seen below:

And I believe this one is of Frieda, who had the Founding Titan before Grisha:

And here is Porco:

Here Are the Memories as Shared in the Manga

On Reddit, u/nashsonn shared a photo of how all the memories appeared in the manga. It’s not a spoiler – the scene was the same as the anime, but you can see the memories more clearly here.

For those who couldn’t see the memory sequence clearly in the anime, this is how it was depicted in the manga from ShingekiNoKyojin

Here’s another link in case the embedded one doesn’t show up right in your browser: 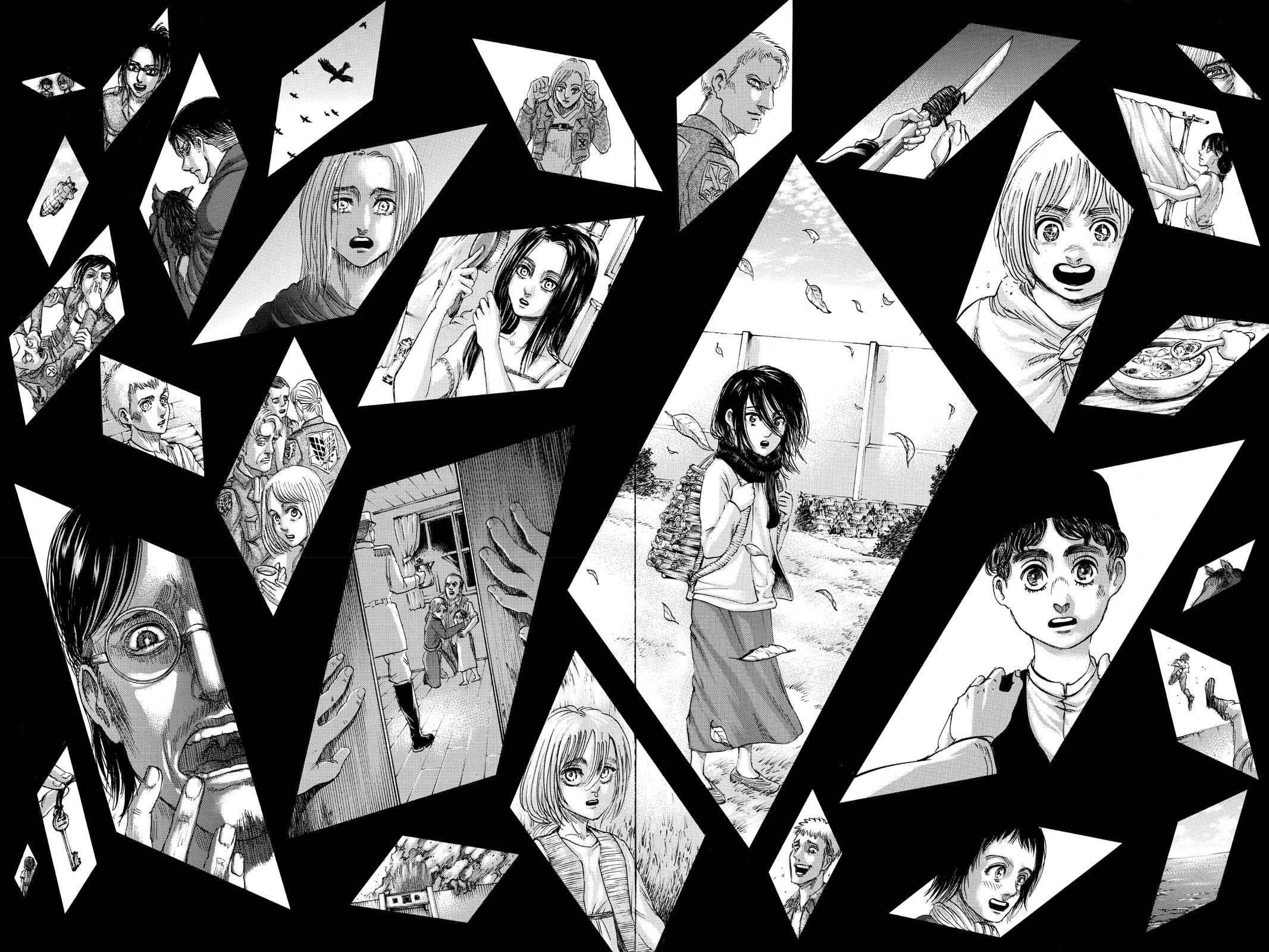 There are clearly photos of Frieda, Mikasa as a child, Eren’s mom, Levi riding on a horse, Hange, Connie and Sasha, Historia, Grisha, the key he gave to Eren, the Colossal, Annie, and a few scenes I don’t recognize. The boy in the black cap, for example, iks not someone I’m recognizing.

There’s a scene in the memories of Reiner when he was encouraging Eren, and I *think* the photo of the armed Marleyan shows Grisha’s dad with his wife and a young Grisha after his sister was killed, but I’m not really certain. Maybe it’s Grisha’s sister in that photo right before the Marleyans killed her.

There’s a lot to unpack in these memories.