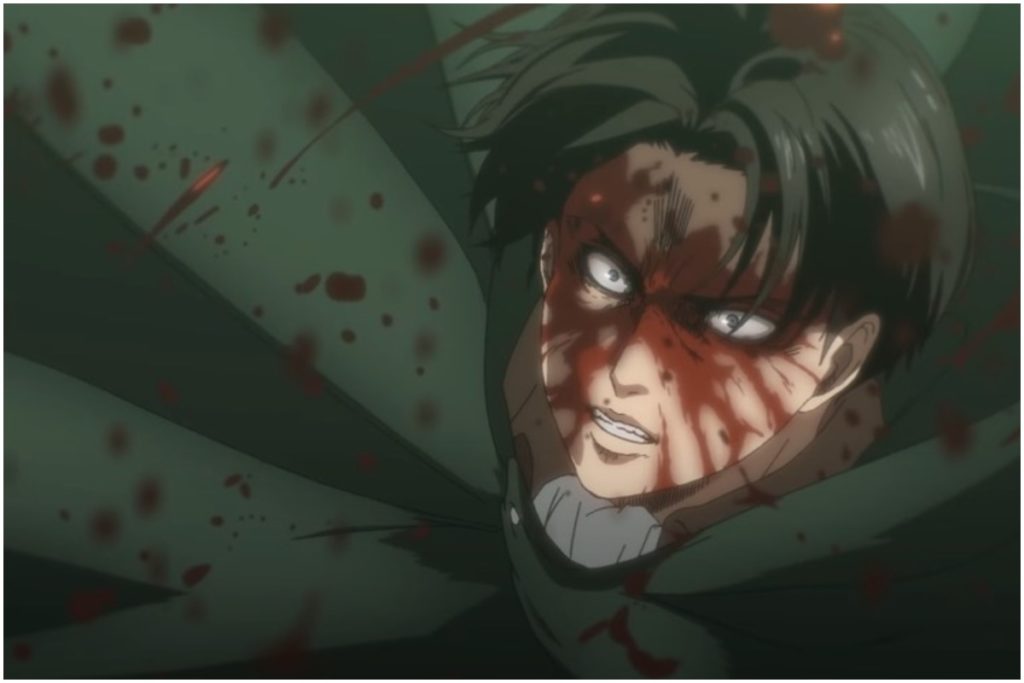 Attack of Titan Season 4 Episode 17 (aka Episode 76) didn’t answer one major question that fans had dating back to Episode 16: is Levi alive or dead? Even when the episode ended, fans still weren’t sure whether we’ll see a living Levi again or not. Here are the clues we have so far that point to Levi’s fate.

This article will have spoilers for the newest episode, but the article itself is manga-spoiler-free. For anime-only discussions, join us on Discord or in our AoT Facebook page.


Levi Is Likely Alive, But Barely

All clues are currently pointing to Levi barely being alive. He came close to dying, but he’s not dead yet. However, what will happen from here remains to be seen.

Here are the reasons why we think he’s still alive.

When Hange finds Levi, he’s in terrible shape. We never see him moving at all in response to her. His eyes are open, but they don’t seem to register anything. At least some of his fingers were dismembered when the thunderspear exploded. Unlike Erwin when he was near death, Levi doesn’t even seem able to talk.

But despite all that, Hange is still very protective of him when it comes to Floch. She tells Floch that Levi is dead, but she won’t let Floch see his face or check his pule.

And as soon as the opportunity presents itself, Hange takes his body and jumps into the river when she has a chance to escape.

All of this points to Levi having a very weak pulse and just barely clinging to life.

But what will happen from here? Will he survive but with missing body parts, perhaps even worse off than Erwin was after his battle when he lost an arm? Or will he be so close to death that they choose to use one of the few Titan syringes that Yelena brought them, in a desperate bid to keep him alive until they can feed him a warrior Titan? But who would they even have to feed to Levi — Annie? If Eren’s Warhammer power could break through Annie’s shell, she might finally have a purpose on this show after all this time.

Those are a lot of “ifs” though. The only character we’ve seen in worse shape than Levi and still survive was Armin after he was burned to a crisp. Even as close to death as he was, they were able to use the Titan serum in the syringe to bring him back, and immediately feed him the Colossal Titan so he could live. I can definitely see this being a plan for Levi too. But if they don’t have a Titan readily at their disposal, would they maybe keep him caged up somewhere that he couldn’t escape?

And besides that, what happens if an Ackerman is given Titan serum? This question was pondered with Mikasa, and given by her friends as one reason why she couldn’t eat Eren when the end of his life came and take his place. It’s really uncharted territory.

My hope is that they will try to use Titan serum on him, and we’ll learn more about the Titans and the Ackermans based on what happens to him when they do. Let’s not forget that it was the Eldians’ royal family that created the Titan serum in the first place. (Remember when Eren found Titan fluid with a label for his hardening power?) Because of this ability, it’s possible that they used Titan fluid to give the Ackermans’ their powers too (or something similar.)

Many viewers think Levi is still alive. In a Reddit thread that was designated for anime watchers only, @AdeQ217 wrote: “You guys think Levi’s alive? I think Hange wouldn’t risk getting shot if she didn’t know if he’s dead or not.”

Redditor u/Sandshaker pointed out in response: “I think he is alive. Hange wouldn’t let him take his pulse.”

Redditor AdeQ217 replied with the same feeling I had while watching: “Yeah, I was kinda shocked when Hange first said he was surely dead but something seemed suspicious when Hange refused to let Floch take Levi’s pulse.”

There’s really no reason why she would jump in the river with his body if he was dead. They’ve already lost so many people, including Erwin, that even sentimentality wouldn’t cause them to risk their lives just for someone’s dead body.

Some people think Levi will be seriously injured at the end, maybe even wheelchair bound. So while he’ll be able to give advice and such, he won’t be able to fight and play a pivotal role in how things turn out in the end. I think that would be the saddest reality next to his dying. 😢

animeattack on titannewsTV
Previous ArticleWhat Did Zeke’s Vision Mean on ‘Attack on Titan’ Season 4 Episode 17?Next ArticleBest Post-Apocalyptic TV Shows in 2022 That You Don’t Want to Miss