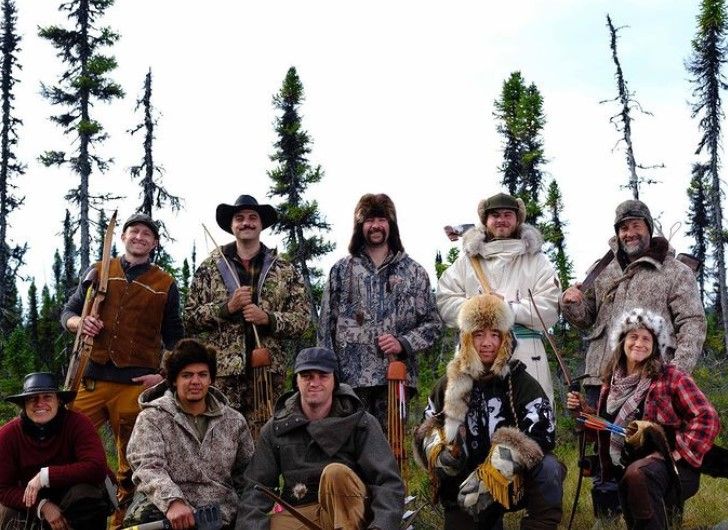 Episode 11 of History Channel’s Alone, Season 9, takes place over days 62-78. Three contestants remain at the start of the episode.

This is a recap and review of the Finale! As of the start of the episode, Tiemojin had lost 54 pounds so far and can barely carry a bushel of sticks. He spends a lot of time thinking about his mom but also the survival goals he set out to achieve.

It’s clear he’s going to tap out, but first, he decides to make a final gesture in honor of the Canadian Grenadier Guards, as per his military background.

His reason for leaving is that he’s at the end of what he can endure. His body has taken a beating, but he’s decided his mom will still be proud of him. The goals he set out to do on the show were to inspire her and to test himself and his skills, and he’s believed he’s accomplished this.

Tiemojin survived 63 days. “I feel 100% me,” he says as he leaves, and that’s worth more than half a million bucks. As usual, Karie Lee’s segment begins with her having a good time. She has a fake snowball fight with herself, which was fun to watch. She’s lost 49 pounds since the start of the competition, so you’d think she wouldn’t have calories to burn, but she wouldn’t be Karie Lee without a show of enthusiasm.

Karie Lee makes a trek to check her traps and fires an arrow at a squirrel but misses. As she walks, she explains how she wants to use the winning money to buy a piece of property to relocate her yurt and use the yurt as a classroom so she can build her own home.

A few days later, after deciding she’s too weak to hunt, she explains another motivation for going on the show. Her friend, Colette, has cancer and can’t live in nature due to her condition and treatments. Karie Lee explains that her friend is using Karie Lee as motivation, so she in turn is using Collette as her motivation for endurance.

Karie Lee then locates alder to make skis but never uses them. She grows weaker and weaker and can’t sleep because she’s sore from weight loss. She becomes emotional, showing the camera that instead of a picture of a family member, she’s brought an inspirational message, “Do Your Dream.”

A day or so later, we see her sitting in her shelter, the phone in her lap. She’s tapping out. She says, “It’s time to take care of myself.” My reaction was less profound:

Yet, despite not winning, Karie Lee did exceptionally well in the wilderness and is very happy to go home. She explains she’s stepping into elderhood and wants to focus on helping those around her. She doesn’t feel like she’s lost, but she’s coming home with a lot of wisdom. I’ve learned a lot from her, just from watching the show. This leaves only one contestant. At the start of the episode, Juan Pablo has been fasting for eleven days. We see his ice chisel in action, which he uses to make holes to get water. He also patches a hole in his tarp and decides he’s going to build a fire.

Juan Pablo hasn’t had a fire in 62 days at this point, so he uses a mallet he made on day 23 to cut wood. He decides to have a fire for no other reason than “to stop the monotony.” The fireplace he built using paint cans he found is very smokey and smells … awful.

Given the fumes make him feel a bit sick, he decides to vacate his shelter and then redo the fireplace with other cans he’d saved. As he does so, he talks about his partner Jennifer and his plans to build a homestead.

After he thinks he sees a polar bear across the lake, he starts going a bit … bonkers. He makes a few nonsensical statements in the night, then decides he’s going to go for a walk on the ice in the morning. As he takes in the beauty of the winter landscape around him, he decides he’s going to propose to Jennifer when he gets back – he’s finally realized that he doesn’t need money to do so.

As usual with the finales in Alone, Juan Pablo is told to expect a medical check. He doesn’t look as emaciated as other past winners, but he also chugs water to raise his weight and lower his blood pressure before the team arrives.

And, as expected, he has a tearful reunion with Jennifer. He shows her his shelter, and I kind of hoped he’d propose right then and there (but no luck!). As he leaves, he talks about how “many people nowadays need more resilience.” As someone who survived on next to no food in the wilderness for 78 days, Juan Pablo is definitely merited in saying this!

The more seasons Alone makes, the better the contestants seem to be at survival or wilderness living. This is a different dynamic to the earlier seasons, as we saw relatively untested people making lots of mistakes and (sometimes) bumbling around. As such, this Finale was a little bit slow. It’s less interesting to watch contestants simply outlast one another by sitting around than to have people leaving due to mishaps or poor planning. It’s still an immensely enjoyable show, but it makes me wonder what curveballs the producers will throw at the contestants in new seasons!

Congratulations to all the contestants, but especially Juan Pablo!

Follow our PostApocalypticMedia newsletter to keep up to date on all the reviews of Alone, starting with the spin-off Alone: Frozen, airing on August 11th.