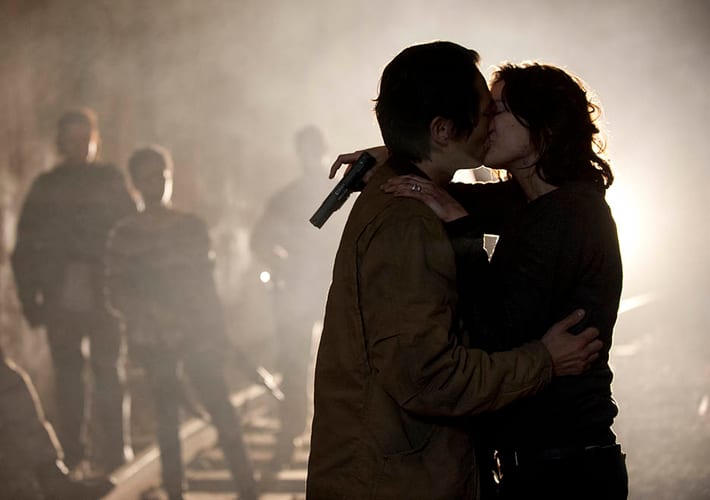 It’s Valentine’s Day, and nothing says I Love You more than killing zombies together, defeating humanoid robots, and taking over a post-apocalyptic waste-ridden world. That’s why I scoured some of our favorite end-of-the-world TV shows to find the best, most bad-ass post-apocalyptic couples around. I tried to limit this list to only characters who actually ended up together (even if something later broke them up), because this list would be endlessly long if we listed all the couples that we want to happen. (I’m looking at you, Carol & Ezekiel or Carol & Daryl!)

Do you agree with our list or did we leave out someone who is epically important? Let us know in the comments below who you think makes the most bad-ass post-apocalyptic couple ever. Here are our picks, in no particular order.

(Warning: There will be spoilers for most shows through 2/14/17. If you don’t want to see the spoilery parts, just skim the headlines and read the descriptions for the shows you’re caught up on.)

1. Rick & Michonne on ‘The Walking Dead’

Rick finally got over the horror that was Lori and the subsequent haunting that was Lori… Then he moved on from his dysfunctional Alexandria relationship and has finally settled into something more stable. Honestly, I kind of feel like Michonne could do better than Rick. But they’re both very strong survivors who have made their mark in the post-apocalyptic world, so they certainly have earned the “bad-ass” label. (Missed any episodes? Stream The Walking Dead this season here.)

oh look, another example of rick looking at michonne like she's the most beautiful person in the world. pic.twitter.com/bpeQpDat8G

#MeanwhileBackAtThe jail, Maggie and Glenn are the cutest couple ever. pic.twitter.com/G0geGiDHAI

Sometimes I had mixed feelings about Maggie and Glenn, like when they abandoned all other goals to find each other again, or when Maggie seemingly forgot all about Beth in her quest to reunite with Glenn. But these two were fighters and remained together for a long time despite all the odds. They had an amazing love despite the worst of circumstances and I couldn’t help but be pulled into their romance. Glenn’s death was one of the most heart-wrenching (not to mention horrifying) on The Walking Dead. After all that Maggie’s been through, she deserves to be on this list.

But I’ll be honest… If Carol were in a relationship with pretty much anyone, she’d be headlining this list. Carol is THE bad-ass fighter on The Walking Dead, and if she ever gets over her current PTSD and guilt, she’ll earn that title again.

When Lexa died, the fury of a thousand worlds was unleashed on the Twitter-verse. Clarke and Lexa were the power couple on The 100. The despair over Lexa’s unexpected death was so fierce that J. Rothenberg had to leave Twitter forever. Now, fans are arguing over who Clarke will end up with next. Could it be Roan? Could it be Bellamy? No matter what side of the ship universe you fall on, you have to admit that Clarke and Lexa were bad-ass. At first, they were on separate sides and only looking out for their own people. But once they got on the same page, they were ready to move mountains. It’s a shame we didn’t get to see them take over the world together.

Meanwhile, let us not forget that Clarke was also part of the all-time worst post-apocalyptic duo: her unholy tying with Finn. I was never a big fan of Finn and even wrote this story dedicated to his craziness. (Missed any episodes? Stream The 100 here.)

Join us as we head back in time for this pick, taken from one of our top favorite post-apocalyptic TV shows of all time: Battlestar Galactica. My heart still races a little faster when I hear that familiar theme music. Adama and Roslin were indeed one of the ultimate power couples. When they were at odds, the entire fleet was ready to fall apart. But when they were together, they could accomplish anything, even emerging victorious against the Cylons. Unfortunately, their love was also their weakness. When Roslin died, Adama just gave up at life, not even caring that he still had a son alive who needed him. But this really just makes their story that much more epic. They were the ultimate power couple in a post-apocalyptic world, who managed to stay together, thrive, and win despite all odds.

laura roslin and bill adama | bsg
-for she is what i am. pic.twitter.com/E2iUcjf7f9

Some fans might wonder why Starbuck isn’t on this list. Well, I was never a fan of Starbuck & Apollo, but I loved Starbuck and Anders together. And you know what happened to him. :(

LOST isn’t technically post-apocalyptic. But as long as they were stuck on that darn island, they might as well have been living in a post-apocalyptic world, so I’m counting it in the genre for the purposes of this story. I thought about Desmond and Penny when I considered adding Kane and Abbie from The 100 to this list. Desmond and Penny, however, were far more epic. Desmond endured terrible hardship and held onto his love for Penny against all odds. No one will ever forget *that* phone call. (You can watch Lost again online here.)

As long as I’m talking about LOST, I have to also address Rose & Bernard. They weren’t bad-ass in terms of going around and killing people and taking over the world. But in terms of surviving in a rugged world without the comforts of home, they had everyone beat. This couple had more security and stability than anyone else on the show (*cough* Kate/Jack/Sawyer *cough*). Bernard committed to marrying Rose even knowing that she was terminally ill. She believed that he was still alive, even when she didn’t see him for her first 48 days on the Island. They had some fights, but got over it like a stable couple does. They created a beautiful home together  in the midst of drama and fear. They were amazing.

Who will ever forget this scene?

I’ll be honest: I’m still a few episodes away from finishing season 1 of Aftermath, because when I found out it was canceled, I was really sad. (I still will finish it, though.) So if something terrible happened to these two that negates including them in this list, forgive me! But when it comes to surviving a crazy apocalypse, these two are great. They don’t always make the wisest decisions, and they’re often at odds in their opinions about the end-of-the-world, but they respect each other and they have each other’s backs no matter what. They’re ready to fight to hell and back for their family. And they balance each other out. Joshua studies the spiritual while Karen is a more pragmatic military fighter. Between the two of them, they have all aspects of survival covered. Did you know the actors are also a couple in real life?

Cassie and Cole on 12 Monkeys may have fallings out and end up at odds half the time (or more), but in the end they find a way back together. They have faced nearly insurmountable odds (plus years and years of time!) to find each other. And they don’t give up when things look impossible. Our guest writer Marea wrote a wonderful post about them that highlights their relationship beautifully. Check it out here.

(If you disagree with Game of Thrones being post-apocalyptic, read our explanation here.) Their relationship certainly didn’t start out on a good foot (and from what I’ve heard, it was even worse in the books…) But on the show, Dany eventually fell in love with Khal Drogo. She learned his language, took on his way of life as her own, and gained the respect that would have gone to Drogo for herself. Would they have already taken over the Iron Throne if Drogo had lived? We’ll never know. But so far, no one else has seemed quite powerful and strong enough to be a good match for Daenerys. (Catch up on Game of Thrones online here.)

Drogo and Daenerys ❤
– Best forced marriage in Westeros (only)
– "My Sun and Stars" "Moon of my life" pic.twitter.com/MLaWOTmx1X

Will is a special agent in the world of Colony, working as a “double agent” of sorts to try to figure out a way to survive in a post-apocalyptic world where the aliens have the upper hand and everything feels completely stacked against them. In Season 1, Katie kept far too much from her husband and it almost tore everything apart. But now they’re back on the same page, backing each other up, and managed to forgive each other despite how things had turned out. Now that they no longer have any secrets between them, I’m betting Will and Katie might finally be the power couple they were meant to be. (If you haven’t seen Colony, you really must watch it. You can catch up on Amazon here.)

No list would be complete without Brienne and Tormund, even if they haven’t actually started a relationship on Game of Thrones and Brienne may still be pining away for Jamie. But really, the way Tormund looked at Brienne… He is head over heels in love with her forever. There’s no denying it. (Want to see some great memes about the couple? Check this out.)

So that’s our list! There were quite a few couples that I had to leave out. For example, as much as I loved Falling Skies, there wasn’t one single couple on there who really inspired us or who really seemed to have it together enough to take over the world.  Maybe next year we’ll do a post about the worst couples.

See anyone we missed who should be on the list? Let us know in the comments below.

Previous ArticleRenewKru (May We Meet Again): How To Help Ensure ‘The 100’ Gets a Season FiveNext Article‘The 100’ Episode 4×03 Review: It’s All Been Said Before But I’m Going To Repeat It Anyway

No event found!
Load More
Subscribe To Our Calendar With Your Google Account
Select And Add Upcoming Events To Your Phone's Calendar
Send this to a friend