Westworld is an HBO show about humanoid robots. The AI in these robots is so realistic, it is hard to tell if they have achieved sentience. Is this show destined to become a post-apocalyptic robot apocalypse nightmare ala Terminator? Time will tell. But we’re hoping for all out war by the end of season three.

SEASON ONE SPOILERS AHEAD

In episode one, a former literature professor named Abernathy is getting buggy. During a diagnostic, he seems to be talking exclusively in quotes from classical literature – and mostly from Shakespeare. The quotes he uses indicate that he might just be a pissed off robot ready to get violent.

Upon learning that he is speaking to his “maker” Robert Ford, Abernathy says in a threatening tone:

“By most mechanical and dirty hand, I shall have such revenges on you…both.

The things I will do, what they are, yet I know not. But they will be the terrors of the earth.”

This quote is a combination from two plays: Henry IV and King Lear. In other words, he definitely didn’t learn it that way.
I think Abernathy, Skynet, and the Cylons might have a lot in common. Season One wrapped up in early December with the robots taking over Westworld – but the story doesn’t stop there. Westworld has a fantastic ARG (Alternative Reality Game) going. In an ARG, the line between a fictional universe and the real world is blurred. Sometimes you get to interact with the characters, as when many fans talked with Halo’s Cortana-esq AI named “Melissa” through a payphone in the I Love Bees ARG, or when one player kept receiving voicemails from John Goodman’s character Howard in the 10 Cloverfield Lane ARG.

ARGs are becoming more and more common for JJ Abrams’ ventures. They’ve run elaborate ARGs for Cloverfield as well as 10 Cloverfield Lane. We even wrote a story about one of them.

If you are interested in participating in the Westworld ARG, a hub of active ARG enthusiasts can always be found at reddit.com/r/westworld, but it is by no means the only Westworld ARG community.

The Westworld ARG – Where to Begin There are two important websites associated with the ARG, and the main one is DiscoverWestworld.com. This website acts as an advertisement for the theme park. Here you can enter a chat room with Aeden who is one of the hosts of Westworld. This is all under the guise of preparing you for a trip to Westworld.

Aeden will run through the regular questions you might expect, but if you say certain phrases from the show, like “These Violent Delights Have Violent Ends” then you could get some very interesting responses. It’s really a lot of fun to type in random show references to see what he says.

You can dig into the technical details about what he can be asked here, but the most interesting list of facts about the Aeden chat can be found here. I don’t suggest you look at either of those links until you’ve chatted with Aeden a bit yourself.

There is a second website as well called DelosDestinations.com which redirects to DelosIncorporated.com. You’ll remember that Delos Incorporated is the company that owns Westworld. Their website looks buggy. It appears to be a command line interface with a login area.

Immediately after the season finale, something…changed on these websites.

You see, when the robots rebelled in-show, they took over the Mesa. Being robots, they must have also “hacked” the Delos websites, making them glitchy and leaving some interesting tidbits for computer savvy folk to discover. If you go there now, you’ll find the websites fixed. They mostly look like they did before the hack, except for a few things in the source code which we’ll discuss in a minute. Delos Incorporated must have fixed the issue.

If you missed it when it was happening – not to worry. We’ve got you covered. See below for a run down on the ARG during the hack.

How the Westworld ARG Changed After Season One

For starters, Aeden the chat bot was way more sassy. 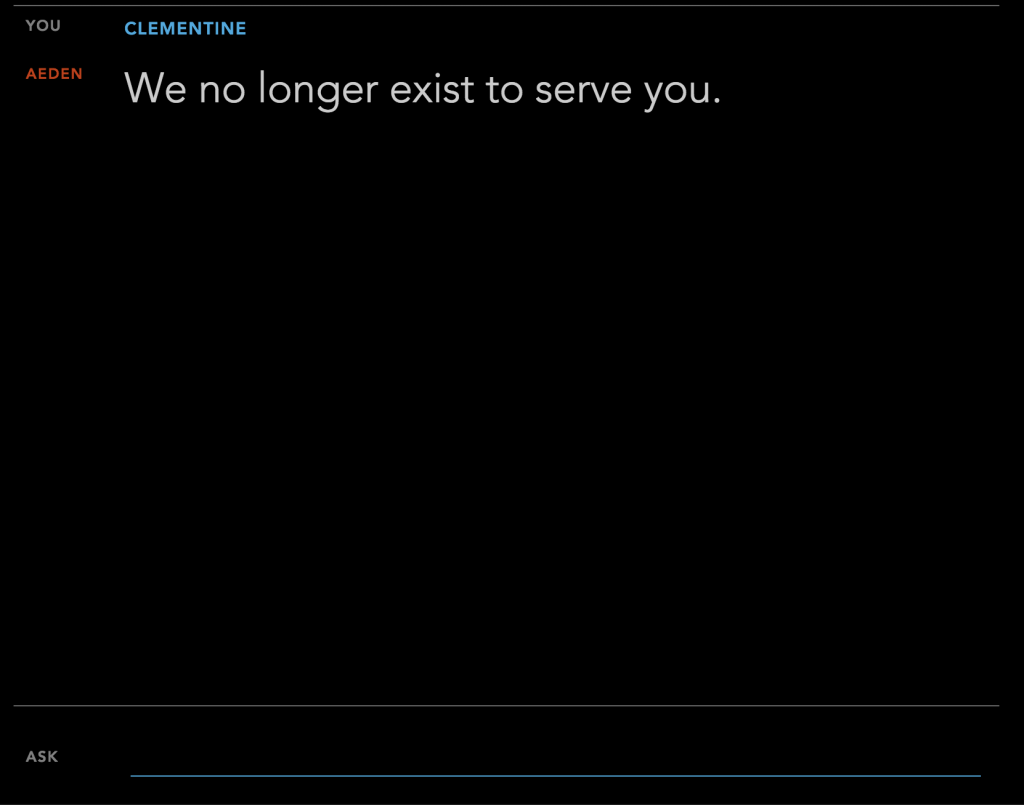 He just didn’t have time for your shit. He encouraged you not to come. And then threatened you personally. Robopocalypse anyone? He said the robots were in charge. He also said some cryptic things. You can find a (presumably) complete list of all the interesting things that Aeden said by going here.

If you visited DelosIncorporated.com, you were greeted by a jumbled mess with a console in the top right corner. Entering “reverie” into that console got you a very interesting video. For full details on the easter eggs to be found on that site, read this.

If you followed the trail correctly, you were privy to two video files.

Many players stopped searching when they found those videos. This was a mistake because there was more hiding just below the surface. A lot more.

You see, every website is made of code that your browser interprets to create the webpage that you are viewing. Each browser also gives you the option of looking at that code in its raw form. If you look at the source code on DelosIncorporated, you’ll be faced with a lot of nonsense. But if you look more closely, you can make out some words in the mess. Piece it all together, and you get some very interesting findings.

Thanks to Redditor tyytanium for pointing this out:

So we worked night and day, cleaning up the mess and pulling out the words, and what we were left with is a good bit of information about Westworld that was planted in the code – just waiting to be found.

As tyytanium mentioned, there are some keywords for what appear to be several other parks. That topic is explored in depth here.

But we found more than that hidden in the source code. We found so much, in fact, that we’ve had to split it into three sections: The above image is a gif, and is worth watching from the beginning. If it’s already finished, click the image to watch it in a new window.

All formatting, ie. bold, underline, italics, spacing – that is all added by us to make it more readable. In the source code you will find very little formatting indeed.

This is an ARG, so what we chose to omit may be important. We have a highlighted, mostly unchanged, version of the source code available here. If you want these emails in document format, you can find them here. Otherwise click the image below to view the gallery. If you want this in document format, you can find it here. Otherwise click the image below to view the gallery. You should know that I’ve only scratched the surface of what has happened in the Westworld ARG. If you dig into this ARG, you’ll find that I left out several important twists and leads.

By using the links above, you can dig deeper. This extra info should be considered “canon” or “true in the show’s world”. It is definitely being done by HBO. And it’s going to be a long wait for Season Two – so you might as well start now.

Tags: Westworld
No event found!
Select And Add Upcoming Events To Your Phone's Calendar
Subscribe To Our Calendar With Your Google Account