OK, I really have to collect myself after this episode. With a return to the Daryl/Leah storyline and probably one of the scariest episodes in a long time, I can honestly say that this one was my favorite of the season so far. Yes, even more so than last time I said that!

So let’s take a deeper look at what went down.

Warning: This article contains major spoilers for The Walking Dead Season 11, Episode 6: On the Inside.

This one starts out with Connie and Virgil running through the woods looking for a place to hide. At the end of last episode, the Whisperer named Keith told Aaron’s group that he knows of group member that made it out of the big Whisperer battle alive, and everyone realizes that it’s Connie. She was left for dead in the cave collapse, but now she’s very much alive and she has Virgil (the man whom Michonne met in a previous season) with her.

Of course, Kelly sets out immediately to look for her sister while the rest of the group talks about forming search committees and all that nonsense. Kelly spends a great deal of this episode looking for Connie and even find her pack and other belongings at one point. This helps lead her (and the others from Alexandria who came to help later) to eventually find Connie.

Daryl and the Reapers
This is a tough episode for Daryl because we see him torturing one of his own people (Frost) to keep up the illusion in front of Pope and the other Reapers that he’s not with Frost and Maggie.

Daryl chops Frost’s finger off when Frost won’t talk, but the tortured man finally concedes and gives a description of the house that Maggie’s small group is in. “Yellow house,” Frost yells when his finger is chopped off. “Town off of the 283. Antenna. Antenna. Antenna. Antenna!” Daryl’s certainly no stranger to dishing out the torture, but the fact that he’s doing it to one of his own comrades for the sake of convincing Pope is pretty hardcore.

The Reapers head out to the location and find that the house is empty, but Daryl soon finds the corner of a trap door in the floor where Maggie, Negan, Gabriel, and Elijah are hiding. He tries to distract Leah and the other Reapers from the trap door, but they eventually find it. Luckily, the group somehow escaped and the underground hideout is empty.

I can’t wait for Daryl to meet Princess hahahah #TWD

When the group meets back up with Pope, Daryl finds out that Pope was able to get a few more bits of information from Frost before he died and turned. Of course, this really messes with Daryl because he’s paranoid that Frost may have ratted him out. He ratted Maggie’s group out, so why wouldn’t he also spill the beans about Daryl’s involvement with them?

Pope just chuckles as he walks away with Carver, whispering and glancing back at Daryl one last time. Leah even picks up on what’s going on and throws a look at Daryl, too. Does this mean that Daryl is done? Does Pope know? Daryl better hope not.

Connie and Virgil
The two survivors are able to break into a secluded mansion and lock themselves away from the undead outside, but they soon find that this house isn’t exactly safe itself.

This entire story branch played out like an ’80s horror flick, complete with a knife-stabbing-through-wall shot, the classic eyeball-staring-through-a-hole jump scare, and some creepy quadrupedal human creatures that freaked me out. And I loved every single minute of it.

Connie figures out quickly that they’re not alone in the house. She has a sense that Virgil didn’t do a good enough job of checking around, and her worst fears are confirmed when she sees a yellowed eyeball staring back at her through a hole in the bathroom.

“Something else is in here with us!” Connie tells Virgil, who has no idea how to interpret Connie’s sign language until she carves the words NOT ALONE on a wall painting.

The fact that Connie is hearing-impaired makes this part of the episode that much more frightening. In a brilliant directorial decision, the parts with only Connie have no sound, so we get to experience what she experiences.

When she’s separated from Virgil, we only hear silence. When she’s alone in a room full of human remains, we hear the same silence she hears. That’s some scary stuff.

But when we see those crawling, half-naked ferals running around on all-fours after Connie and Virgil, that’s when things get really crazy. 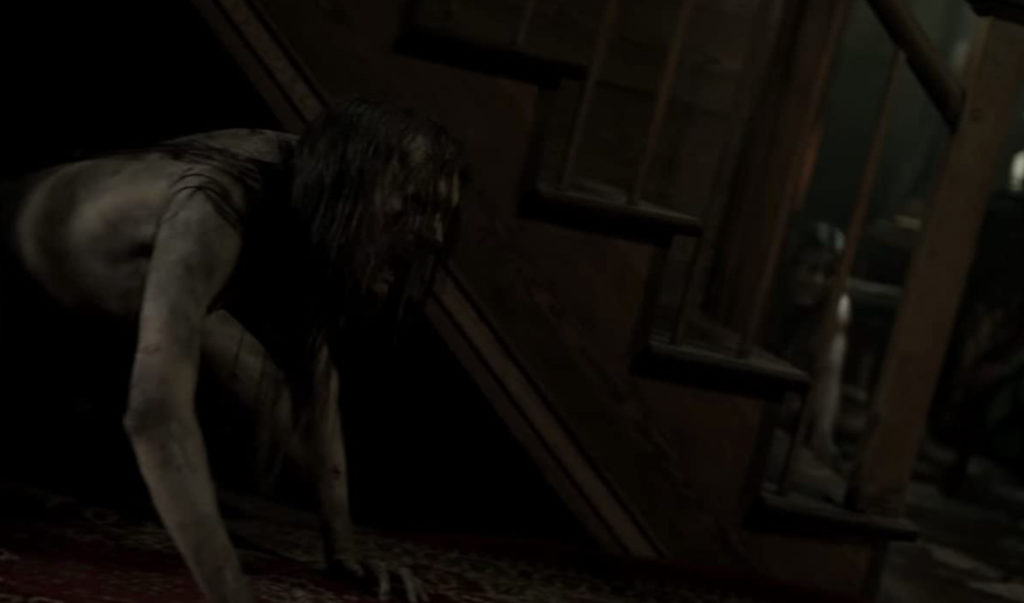 My favorite scene from this episode is when Connie is trapped behind the bathroom wall and Virgil is inside the bathroom hiding from the ferals. Connie is pounding on the wall to get his attention, but he thinks that the noise is coming from one of those creatures. So he slowly creeps up to the wall, knife in hand, to stab the wall.

The humanoid creature grabs him from behind and the two fight it out while Connie watches helplessly from a hole in the wall. Virgil bests the feral when he stabs it in the chest, but immediately turns his attention back to the wall. Does he know that it’s Connie yet? Nope! His knife stabs through the plaster, inches from Connie’s face, but she keeps peeling and crumbling away the wall until she breaks through and they’re reunited.

The two finally make it out of the house through the classic cover-yourself-in-zombie-guts trick, and the waiting undead burst into the house, making short work of the remaining ferals.

It’s good to see Connie and Virgil reunited with the Alexandria group at the end of this one. The hug between Kelly and Connie is icing on the cake. Let’s hope Virgil is able to get the medical help he needs to fix all of his injuries so he can rest up and do it all again, TWD style.

What’s Coming Next?
The trailer for next week shows a bit from every group with a voiceover from Negan that hits home. “The world is different now. Fewer people to fight for; there’s fewer things to fight over. If I could do it all over again? Yeah.”

We also see more from Lance at The Commonwealth, offering aid to Yumiko and her people, but is it just a trap to get access to the Alexandria folks for enslavement? That’s usually how these things go down.

And finally, we see Maggie in a zombie skin mask. Yikes.

Tags: episode 6, on the inside, recap, Review, season 11, The Walking Dead
No event found!
Load More
Subscribe To Our Calendar With Your Google Account
Select And Add Upcoming Events To Your Phone's Calendar

A series of novels, set against the background ...