The Walking Dead Recap: Carol is awesome. That is all. (Warning: Spoilers up to the latest episode!) Seriously, she could be the entire subject of this post because she is AMAZING. I want to be Carol when I grow up. I want to be super bad-ass, able to take down an entire team of bad guys without the help of a single other living person. And then I want to be able to morph into sweet homemaker that no one suspects would even steal chocolate (and I *would* steal the chocolate.)

But all of The Walking Dead is awesome right now. I’m in love with this show. After it’s been live for about 20 minutes, I rush to the DVR and start playing it (because commercials, just no.) My husband has learned that this is one show we will NOT be waiting to watch until later in the week. Must. Watch. Immediately.

With that glowing happiness out of the way, let’s address the symbolism, mystery, awesomeness, and downright crazy moments from the last couple episodes. Remember, you can highlight anything and share it automatically on Facebook or Twitter. Hover over a picture to automatically share it too!

Rick is Turning Into Shane, I Guess

Rick has finally reached that special point in every man’s life when he realizes it’s time to turn into the best friend he had to kill. Of course, now that he wants to date, instead of considering any of the amazing women on his own team, he goes for someone who’s MARRIED. :-/ Just. Like. Shane. Obviously, Rick wouldn’t have had a shot with eligible females Michonne or Carol (I’d still root for him and Michonne, I just think she’s too stable for his tastes.) So rather than considering any of the other available females in the town, he chooses the one who is married. And has two kids. And who’s husband might be crazy.

Really Rick? Do you not recall how terribly this turned out before with your BEST FRIEND Shane, whom you had to KILL?

Does Rick feel like he’s above everyone now? He walks around with his secret gun, ready to shoot it at the slightest provocation, rather than even bothering to use the gun he’s supposed to have. He looks like he’s always on the verge of taking someone out. He wants a fight.

So of course, let’s get involved with the married chick with the crazy kid who stalks women and brands everyone with big COULD IT POSSIBLY BE FORESHADOWING scarlet A. If only Father Gabriel were around to give disapproving looks. Speaking of which… Where IS this man? Did no one give him a job?

Carol is Bad-Ass, Because We Must Talk About This Again

Carol scared the #)(%&# out of that kid, and rightly so. Kids need to learn in a zombie-infested world that it is DUMB to follow strangers around in the dark, just because you greedily want more cookies. What the heck, no “stranger danger” lessons? No “vans with candy” warnings?

Creeper boy NEEDED to get scared *(%#less. And Carol’s method was downright amazing. The kicker? Everyone is convinced she’s a sweet housewife who loved her husband and wants to just bake cookies. If the kid told anyone what she said, they’d all think he was lying anyway.

AMC was kind enough to release Carol’s cookie recipe to us. Gotta love that: 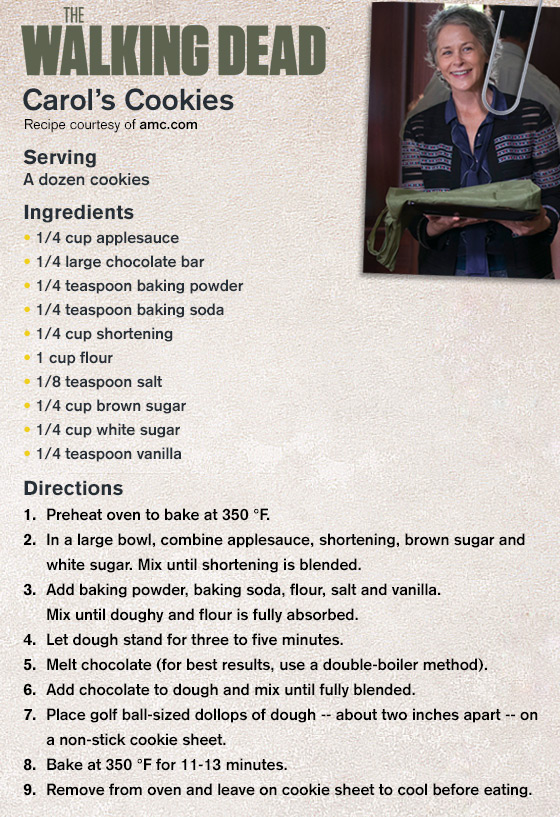 Btw, on an interesting note. I just watched the “Honest Trailer” for The Walking Dead, which was pretty old. It listed Carol as a “random bystander” character. Ohhhh how things have changed. 🙂

Daryl is Stuck with the Worst Luck. 🙁 RIP Buttons. I Still Want to Cry

Daryl tried to save wild Buttons. They had a moment. Buttons died. 🙁 Honestly, some are saying it is foreshadowing Daryl’s own demise if he gets caught. But I also think it is a memory of Beth. Beth was a wild, young stallion kind of. She didn’t want to be chained up. Daryl tried to save her, and she got caught in a pen and killed instead of running away like she could have. 🙁

Sasha Was Pretty Much Forced Into PTSD

She was doing OK, just shooting up framed pictures of family to cope. But then that lady asked her to bring back a leg of a boar… WHY???????? That brought back memories of Bob. And then standing there, watching everyone chew on meat and act like nothing was wrong…right after her boyfriend and brother had died. I don’t blame her for freaking out. I’m surprised more people aren’t.

Have you ever had a situation like Sasha’s? I don’t mean to that degree, obviously. But when you were going through a terrible time, received awful news, or something really bad happened. And you had to sit there and watch a crowd of happy people enjoying life and having meaningless conversations. It can feel really overwhelming and jarring. Like the world doesn’t respect your pain properly, or even recognize that it exists. Crazy stuff. The writers did a good job on this one.

Tell me you don’t see it. They have the same mannerisms, the same voice, the same way of dealing with people… The actor who plays Deanna must have studied Janeway. The script must have directed her to act just like Janeway. If that’s the case, then I’m rooting for her survival. Because The Walking Dead could seriously use a mother-#%*&^ Janeway.

The W’s Are Freaking Me Out. Too Much Foreshadowing. Toooooo much.

So, everything’s about to fall apart. The W’s, whatever they are, are coming. We saw one carved on a zombie head in this episode. The torso zombies all had W’s carved on them. A sign warned that “The Wolves Are Coming.”

It’s happening people. Something terrible. I just hope our folks can keep them away.

Then again, it could just be Morgan, and we’re reading the letters upside down. 😉

Who do you think the W’s are? Leave a comment below!

Tags: deanna, michonne, Rick, sasha, The Walking Dead
No event found!
Select And Add Upcoming Events To Your Phone's Calendar
Subscribe To Our Calendar With Your Google Account