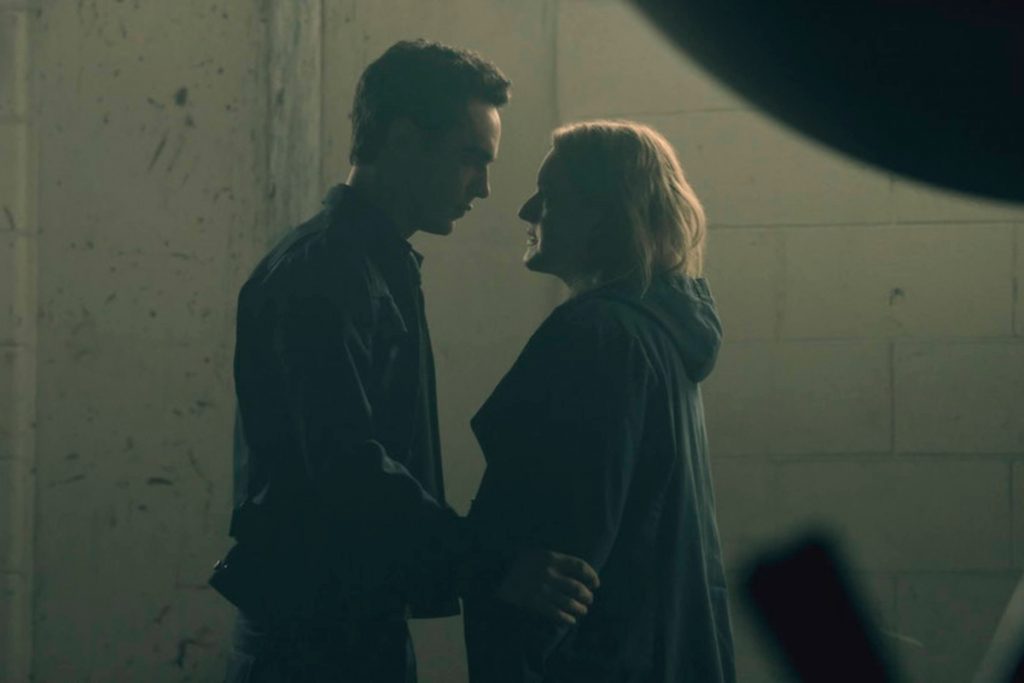 You may be surprised to learn that a lot of scenes were cut or deleted from Season 3 of The Handmaid’s Tale on Hulu. Some fans think these scenes might hold clues for what we might expect to see in Season 4. Videos of the cut scenes haven’t been released yet, and we will definitely update this story if they are. But what we know about the scenes that were cut are pretty compelling so far, and some fans are upset that those scenes were not shown. Do you think these cut scenes might clue us in on what could happen in Season 4?

This article has spoilers for Season 3.

Some Scenes with Nick Were Cut from Season 3

We know for certain that some scenes with Nick were cut. This photo, caught by an alert Redditor, never ended up in Season 3. Redditors said it was labeled as a publicity still for Season 3 Episode 12. The photo was shared on MovieStillsDB.

Some fans are speculating that fan reactions and theories about Nick’s role in the Crusades may have caused the directors to scrap some plans for him this season and save them for Season 4. There’s no proof of this, but it’s a prevailing theory.

Fans also noticed this scene from the Season 3 trailer with Nick never actually ended up in the show. It’s unclear if this still is from the train scene we saw, with an extra scene that was cut, or if it shows Nick on a plane at some point. What we do know is that the scene was definitely cut at some point.

Bruce Miller has said that the show is from June’s perspective. He told Harper’s Bazaar: “When Nick’s gone, he’s truly gone for June, because it’s not like she can look on the Internet or call… It’s like he was plucked off the face of the earth, and in the novel that was such a strong feeling, that he kind of disappeared.”

So the show was trying to stay true to the feeling of Nick’s disappearance in the book, it appears. But Miller also acknowledged that they had filmed some scenes involving Nick that were later cut.  Those scenes were supposed to be in the later episodes of the season. Miller told Harper’s Bazaar: “He (Max Minghella) has scenes that we filmed that we weren’t able to use, and it’s heartbreaking. I feel like sh** when I have to cut that stuff, but sometimes you have to make those decisions when you’re trying to make a good TV show overall.”

Another article from Harper’s Bazaar indicated that there was a storyline with Nick that they “hotly debated” in the writer’s room. Warren Littlefield talked about this scene that we never saw. “What we reveal here is that Nick had an automatic weapon, and he fired, and he was far more active on the other side [than June knew]. It’s horrific for June.” He said in the June 27 article that they had decided to go through with the scene to portray what war does to people.  It looks like this hotly debated scene, whatever it was, ended up being removed after all and we were left with June hearing a vague comment about how Nick can’t be trusted, along with a vague mention from Serena about the big role he played in the Crusades.

Fans are hoping this debated scene has simply been saved for Season 4, where it will get more attention.

On top of all of that, Bruce Miller did a podcast interview where he mentioned that they had “92 stories” written for Nick but didn’t have time to show them. Redditor u/Cablab123 wrote what a lot of fans felt about that news: “And I was forced again to remember how we all had to watch Serena and Fred dance for 10 minutes straight, and I was physically shaking my head as I listened to him say this.”

Nick’s scenes aren’t the only ones that were cut from Season 3. MANY scenes were cut. Here’s a quick look at what we know so far about scenes cut from Season 3, thanks to the research of u/GeorgiaOmaha on Reddit.

At :20 in the video below, we are told there were going to be flashbacks in Season 3 Episode 9 (June’s hospital episode), but they didn’t include them after all. Elizabeth Moss said they just wanted the entire episode to take place in one room, so they cut the flashbacks that were filmed.

A synopsis for Episode 10 reveals that some scenes from Canada were cut. The synopsis originally read: “Ready to strike back at her oppressors, June starts making arrangements for an ambitious plan, but a devious ploy on the part of Commander Waterford threatens to derail her. In Canada, hope turns to tragedy for Moira, Luke, and Emily.” We never did see this “tragedy” that was hinted about for that episode.

I haven’t been able to confirm these, but Redditor u/sparklehan said there were promo photos showing Luke with a passport that might have been cut too.

Burton LeBlanc, the makeup artist for The Handmaid’s Tale, shared some photos for Episode 10 that he ended up deleting because they didn’t appear in that episode after all. If you recall, Episode 10 was the episode where “the ceremony” made its return and Eleanor almost had a breakdown as a result. You can see the photos that were deleted in the Reddit thread below. Some people thought maybe these were for Episode 11 when she was at Jezebel’s, but the clothing doesn’t quite match. Maybe they were for a flashback that was cut?

It’s possible the above photos were from another flashback that was cut.

So it looks like fans missed out on a lot of storylines originally intended for Season 3. Hopefully some of these will show up in Season 4. If you know of other scenes that were cut, let us know in the comments below. We will update this story when any videos of deleted or cut scenes are also released (which we hope happens very soon!)

The Testaments: A Novel *
$6.39
(As of: 2023/01/28 9:58 am - Details
×
Product prices and availability are accurate as of the date/time indicated and are subject to change. Any price and availability information displayed on https://www.amazon.com/ at the time of purchase will apply to the purchase of this product.
)
View now *
(* = affiliate link / image source: Amazon partner program)