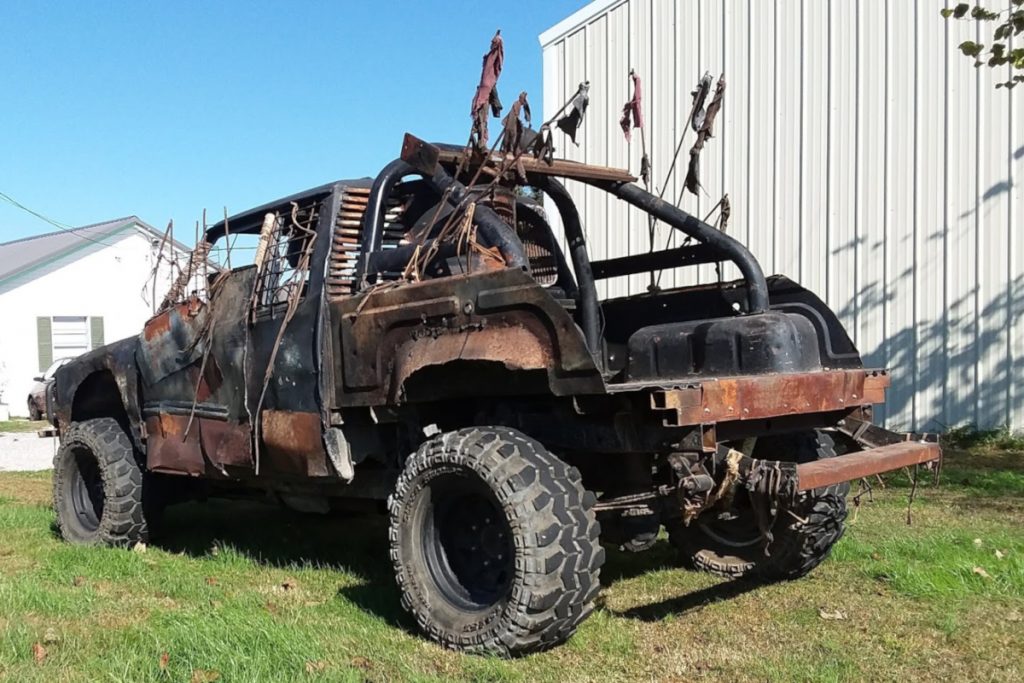 So you just watched Fury Road for the 96th time and you’re thinking that it might be fun to drive a rusty spiked muscle car to your high school reunion. Hey, I get you, and I want to help. And the way I figure it, what better way to introduce myself as a new writer here than to talk about my favorite subject: Mad Max cars!

In the video below, I discuss some of my favorite tips for building a car in the post-apocalyptic or “Wasteland” aesthetic. My main focus with these tips is not so much to act as a step-by-step instructional for building your dream war rig, but to help you plan out a build that would be shown off at a post-apocalyptic festival or immersion event, such as Wasteland Weekend in California.

So the first thing you need to think about is your skill level. Not so much what skill you currently have with auto mechanics or metal work, but also how much you’re willing to learn. Whether you’re an artist, an auto mechanic, or a master fabricator, there are different levels to these builds that may suit your skills and budget.

I’ve thought a lot about these levels over the years and I feel confident that categorizing your own vehicle idea into one of the following levels will help you refine your plans even further and hopefully kickstart the process.

Level One: The Weekend Warrior
A Level One build is best described as one that is temporary. If you want to go to an event on Saturday but you have to park back in your Employee-of-the-Month parking spot on Monday, this is for you. This type of makeover would include something as simple as brushing on washable Tempura paint for rust effects or changing the wheels and tires out for something a bit more aggressive. But the point is that it’s easily changed back.

Level Two: Using Bolt-Ons
A Level Two build is teetering more toward mechanical changes that you could technically reverse, but not as easily. This would include modifications like a lift kit and monster tires for your 4WD truck or exhaust modifications to let the neighborhood know that you mean business. A Level Two is most likely a style that would remain on your daily driver because you like the look and you’re not afraid of what grandma might say at the family picnic.

Level Three: No Turning Back Now
Level Three is where you start getting into the irreversible modifications such as cutting sheet metal, stripping down paint for true rust effects, bolting on some armor, or even swapping one car on top of another’s frame. The changes done to a Level Three show that you are obsessed with every Mad Max movie (yes, including the first one), and you just dare someone to cut you off in traffic.

Level Four: Goodbye Open Road
With all other levels up until this point, the cars have remained street legal. But with a Level Four, you’re going all out. This is where registration and smog tests are a thing of the past because you won’t be driving a Level Four on the street. A Level Four has no windows, maybe it has missing body panels, exhaust pipes sticking out of the hood, and no silly little amber lights indicating which way you plan to turn. When you drive a Level Four, you turn whichever way you want and everyone else bows down while choking on your exhaust fumes. Personally, I enjoy the Level Four the most, but you have to be a special kind of crazy to build one of these just to let it sit in your yard between events. Guilty as charged. The Canvas
Once you’ve decided what level works best for you, it’s time to start searching for that perfect car. Most of the time, you may already have something in mind so you can skip this step, but the key here — especially with your first build — is to start cheap. Look through Facebook Marketplace or Craigslist to find something cheap in your area. Check out auction sites for wrecked cars that are still drivable. You’d be surprised to find what a couple hundred dollars can buy at a car auction.

Personally, I wouldn’t get anything too modern because dealing with computers and modules and sensors isn’t fun. Plus, a plastic car isn’t very wasteland. Grab something that you think would really last after the bombs fall. Something with a carburetor or a points-style ignition that wouldn’t be affected by an electromagnetic pulse.

But realize that you don’t necessarily need to get a classic muscle car to chop up for this project. You can find a cheap 4-door sedan or something with a 6-cylinder engine that isn’t as valuable to car collectors.

Get Inspired
At this point, you really want to refine your plans with this car, and the best way to do that is to scour the internet for visual inspiration. Check out Pinterest or Instagram with hashtags like #wastelandcars or #postapocvehicles to see what others are doing. What is Your Vehicle’s Purpose in the Wasteland?
When you’re planning out your build, a very important step is to realize that vehicle’s purpose in the fantasy world you’re imagining. Is your car a scout vehicle that can travel hundreds of miles with no regard for the next guzzaline stop? Or is it a heavily-armored battle vehicle that engages in front-line combat? Whatever the purpose, imaging (or better yet, writing down) your vehicle’s backstory is a huge help with the planning process.

In addition, you also want to think about your vehicle’s purpose at the event itself. Will your car double as your camp? Then you’ll need to build a comfortable bed inside. Do you want people to be hanging off the sides for maximum photo opportunities? Then build plenty of things to stand on, and test out that suspension and tire clearance. Mind the Rules
At Wasteland Weekend 2018, the organizers of the car cruise decided to weed out those vehicles that didn’t exactly fit the theme of the event as much. They basically took the meanest, most Fury-Road-esque vehicles and let them play together in front of the best photographers in the genre. That did ruffle the feathers of those who maybe trailered their cars across the country for that show, but I can also see why the powers-that-be needed to put some kind of line in the sand (literally!) to show exactly what they expect from those cars representing Wasteland Weekend attendees.

So my advice to you if you’re building something specifically for Wasteland Weekend is to check out the “vehicle rules” section of the event’s website to see if your own project meets that criteria.

Hopefully this little guide helps you navigate your options and start planning that wasteland car once and for all. Best of luck with your build!