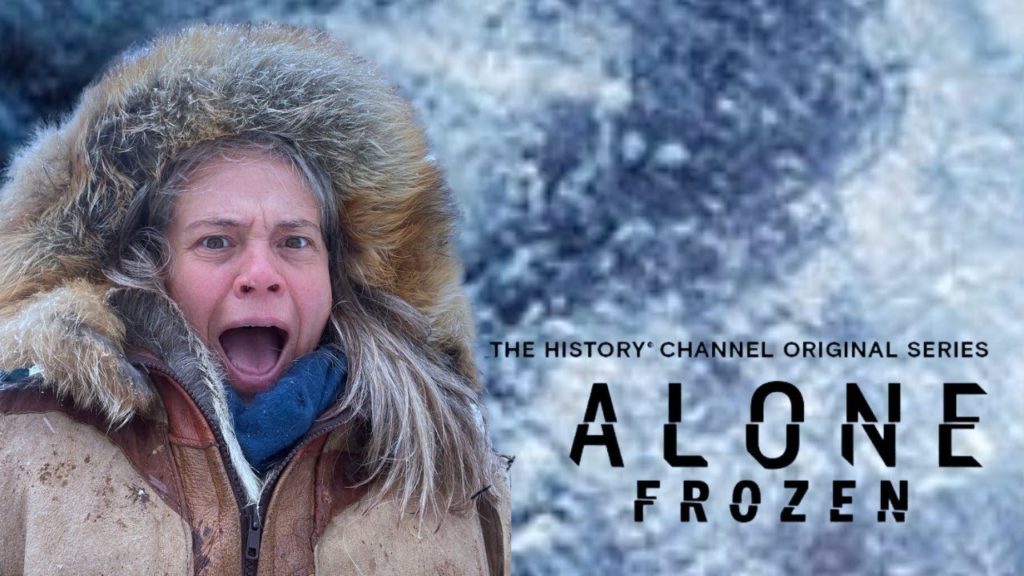 This is a recap and review of the Finale (episode 8) of Alone: Frozen. The episode takes place over days 33 – 50. Two contestants remain at the start of the episode.

As to be expected by day 33, Michelle is growing obsessed with food. She heads out to check her snares and spots a grouse strutting around. In one of the more dramatic moments this season, she shoots it but only wounds it. It darts away, and she takes off after it. She catches up with it, shoots at it again, and gets it!

After this, due to the snow and storms, she spends a lot of time in her shelter. As she needs fire to keep warm, she is exposed to a lot of smoke, so much so that her left eye begins to hurt. The next day, it’s still irritating her, and her vision is blurry. Michelle had made a promise to herself that if she thought something was physically wrong with her, staying in Labrador wasn’t worth damaging herself, so … she taps out with 12 days left.

While waiting for pickup, she explains that a weight has been lifted off her shoulder, and she’s proud of herself for the hunter she’s become. Michelle is a great example that you don’t need to be big and burly to survive in the wild.

On day 33 (17 days left), Woniya begins upgrading her shelter. She builds an awning and makes a door from old planks, which saves her from having to crawl through the snow to get in and out of her fort. At this point, the snow is knee-deep, but this doesn’t help Woniya with game trails, as none are visible on her way to check her traps.

In a moment similar to Michelle’s, Woniya comes upon a rabbit while checking her snares. In attempting to sneak up on it, she realizes its foot is caught in a snare, so she pounces on it with her axe.

At this point, Michelle taps out, so Woniya is the last person standing. But does she make it to the finish line?

She has some issues, such as her walls leaking and a similar smoke irritation issue to Michelle, but she recovers. We see most of what she gets up to in the last week in small snapshots. She goes ice fishing, reinforces her shelter, and hunts more. Unlike the last few episodes of Season 9 of Alone, which was, to be honest, a lot of watching people sit around conserving energy, Woniya is very active. She discusses how she had to fight to get her skills as a girl because she had no mentor or role models in the wilderness living world, and how she is doing this season not just for herself but to inspire girls.

Finally, she reaches Day 50. She builds an Inukshuk (a rock statue originally made by Indigenous groups as way markers), then heads to her shelter, where the team is waiting. She talks about her mixed emotions in a very composed way … until her partner shows up and she breaks down. She’s blown away to be not only the only one to make it to 50 days, but to be the first woman winner of Alone! And to make it a hat trick, she’s the person to have, collectively, spent the most time in the wilderness on Alone (73 days in the Artic and 50 days in Labrador) too.

Woniya truly is an inspiration to anyone who wants to be a survivalist, with her problem-solving, positive attitude, and straight-up skills.

She makes me want to venture out into the wilderness!

Overall Impressions
I really enjoyed this spin-off of Alone. The countdown aspect of the duration created a different trajectory for the viewer, and it was fun to see contestants we had seen before taking new approaches to survival.