Check out these thirteen movies if you want to blend your love of everything post-apocalyptic with horror this Halloween. Zombies are probably the easiest crossover between horror and post-apocalyptic, as they allow the mixing of the end-of-the-world with all types of horror elements: gore, jump scares, and monster chase scenes. Of all the zombie movies out there, these two made the cut because they introduced the running zombies, which was a significant shift in zombie lore (and, arguably, makes zombies a lot scarier).

Yet, if you want a more classic approach instead, you can never go wrong with a Romero film. 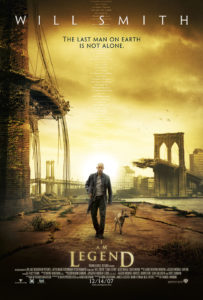 The monsters in I Am Legend are more mutants than zombies, but they are fast and creepy, and that scene when Will Smith’s character walks in on them in a huddle? Yeeeesh. It features a mix of running/hiding from monsters and one lone man (and his dog) surviving in an abandoned city. It’s a great post-apocalyptic horror to introduce to younger viewers who are ready for genuine scares but nothing too gory. 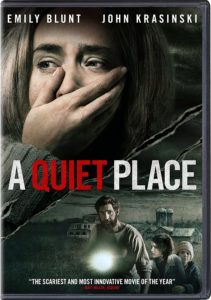 A great horror movie that focuses less on gore than jump scares and tense moments, A Quiet Place is fantastic to watch over Halloween. You have a world taken over by monsters, people forced into a survivalist lifestyle, and many creepy creatures. The second movie ramps up the horror a bit more. A spinoff of Cloverfield (2008), which pushed the “found footage” filming technique to the forefront of cinema for a few years (for good or for ill), this related movie took on a more psychological aspect. We have two young people seeking refuge from the monsters in the bunker owned by a man played by none other than John Goodman. If the shaky cam and monsters didn’t do anything for you in Cloverfield, this movie has none of that and is a terse thriller about trust and control. 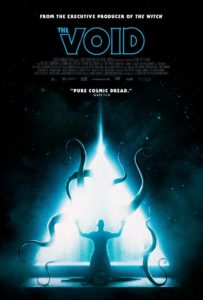 More about bringing about the apocalypse than taking place during one, The Void is a tense, terse thriller about cults and Lovecraftian horror that’s perfect for the spooky time of year. It has a lot of elements of horror, such as gore, a creepy hospital, weird (and intricately designed) monsters, and excellent special effects. Whether it is post-apocalyptic is up for debate (as the movie has a rather cryptic ending), but either way, it has a great deal of tension, jump scares, and uncanniness that you won’t go wrong watching it on Halloween. You’re never really sure what is going on, but in a way that makes it both a mystery and a nail-biting horror. While not exactly horror, Contagion is downright terrifying, especially today. A plague movie, this star-studded film deals with a medical mystery and the breakdown of society. More horrifying (and disturbing) than scary, The Terror Within is great if you love 80s animatronics/costumes and creature features. Set in a post-apocalyptic world, it deals with mutant creatures that run rampant in a bunker. (A word of warning, there are themes of sexual assault pertaining to said mutants.) For those unaware (of both the movie and the game series it is based on), the main action of Silent Hill takes place in a ravaged parallel dimension wreathed in thick fog. If you like horror movies with cults and distorted, uncanny monsters, where the characters are forced to hide rather than fight, this one still holds up on the creep and (copious) gore factor. One of those lead-up-to-the-apocalypse movies, Cabin in the Woods is a comedy horror about a group of witless teens spending a weekend at, you guessed it, a cabin in the woods. A pastiche of a horror movie (meaning it makes fun of the genre while also being part of it), it has a great mix of classic horror tropes, references to other horror movies, and laughs. Oh, and a killer unicorn. 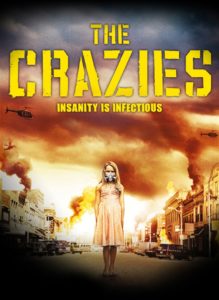 A remake of a movie from 1973 (which is also worth watching), this movie features a town overtaken by a disease that causes the people to turn into maniacs gone berserk. While not the best horror movie out there, if you beginning-of-the-end stories, it’s worth a watch. A severely messed up, yet visually stunning, film, Mad God is shot primarily using stop motion. Definitely not for the faint of heart, it definitely is a movie you can check out at Halloween to satisfy your need for fear and the apocalypse. You can check out a longer review here. I had to include a vampire movie, and Daybreakers is one that is decidedly post-apocalyptic. Set in a world where everyone is a vampire and the blood supply is drastically low, it’s a good mix of vampire attacks and an interesting take on a dystopia. If you want more of a classic vampires-attacking-humans movie, 30 Days of Night (2007), while not post-apocalyptic, has the “isolated town” aspect that often has that vibe. Let us know in the comments what your favourite wasteland horror movie is, and Happy Halloween!

Tags: 10 cloverfield lane, 28 days later, a quiet place, cabin in the woods, contagion, dawn of the dead, Halloween, horror, I Am Legend, mad god, movie, silent hill, the terror within, The void, us
March 2023
01 Mar
All Day

Tags: 10 cloverfield lane, 28 days later, a quiet place, cabin in the woods, contagion, dawn of the dead, Halloween, horror, I Am Legend, mad god, movie, silent hill, the terror within, The void, us
October 2023
20 Oct
All Day

Tags: 10 cloverfield lane, 28 days later, a quiet place, cabin in the woods, contagion, dawn of the dead, Halloween, horror, I Am Legend, mad god, movie, silent hill, the terror within, The void, us
No event found!
Select And Add Upcoming Events To Your Phone's Calendar
Subscribe To Our Calendar With Your Google Account