Christopher Hockett got into the post-apocalyptic culture just like I imagine the rest of us did: he grew up in the ’80s and ’90s. Mad Max, Waterworld, The Postman, Escape From New York, and The Day After are all movies Chris cites as influences for not only the way he was raised, but also his style of propmaking. 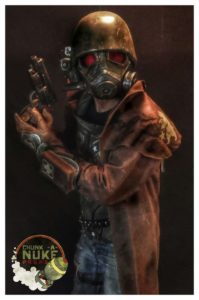 is Christopher’s brainchild he began after running across a AER9 Laser Rifle build from Volpin Props about eight years ago. “I have always been crafty since I was little and figured I would give it a go,” he said about duplicating the iconic Fallout 3 weapon.

But Chunk-A-Nuke isn’t all about expensive materials and fancy technology; Chris prides himself on making the best props on a tight budget. “I just have this thing for repurposing,” he told me. “And the way the clothing, armor, and weapons have this grimy, rusty, and hastily thrown-together look due to using whatever you can find laying around to make what you’re crafting serve a purpose, even if it is not what that piece was originally intended for.

“I would have to say that I am a repurposer or just a Cheap-o,” he continued. “I don’t exactly have the money that other big name prop builders have and I don’t want to let that stop me from doing what I love, so I use trash, common household items, and freebies. I try to spend as little as possible. It’s a challenge but that’s how I like it.”

Chris also goes by the name LIBERTYprime (or, at times, L1B3RTYPR1M3) in most of his professional work, dating back to an old moniker he came up with for The Wasteland Outpost forum. That site and community helped him create his first build: a suit of T45d Brotherhood Outcast armor and matching Gatling Laser from Fallout 3. “I still have them both on display with my Fallout collection,” he said. “I don’t think I can ever bring myself to get rid of them as they hold a special place in my heart. I love just looking at them and remembering how it all started for me.” 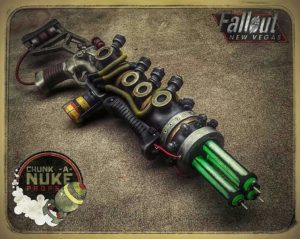 But Chris admits that his technique hasn’t changed much over the years, aside from his painting style. “I still use trash and whatever freebies I can.” In fact, a Multiplas Rifle that he credits as his favorite work so far was built using electronics that Chris wasn’t sure would even work. “It was quite a challenge for me to build due to the overall shape and the electronics. I’m still surprised I was able to get the lights to work with the junk I used.”

Right now, the goal with these props and costumes is to have the largest Fallout prop collection anywhere. “I think I’m pretty close if not already there,” he said. But aside from the collection, he hopes to just keep making props that people will enjoy. “I really just want to inspire people to get out there and build something.”

That inspiration comes in so many forms with Chunk-A-Nuke’s portfolio, but the underlying lesson here is that you don’t need to spend a lot of money to make something memorable. “Don’t let funds, lack of tools, or your skill set get in the way of getting out there and just building something because there is always a way,” Chris offers. “Take as much constructive criticism as you can and don’t get upset when someone says that you can improve on something. It may hurt your feelings a bit when you spent so much time on something but I know it has helped me tremendously and I actually look forward to people pointing out the flaws in my work. Not everyone out there is trying to be a troll.”

This article originally appeared on Aftermathevent.com