Season 5, Episode 4 (“Gaugamela”) was a great episode of Amazon Prime’s The Expanse! This article includes spoilers galore for Season 5, so please watch the show before reading! With Inaros’ asteroid attack, the social and political landscape of the galaxy has been irrevocably altered.

What do we know about the consequences of the Asteroid’s landfall? The first one that hit was 200-300 kilotons. The second landed forty kilometers northwest of Philadelphia. While we haven’t seen any footage on the ground from either area, the attacks will clearly have devastating consequences as the news reports had the death count in the millions. And that was just from the initial crash, not any fallout from natural radiation and shockwaves.

Holden has another reason to be sad in this episode. I, for one, was not expecting Fred Johnson to die! And definitely not by being shot in the back (I always assumed he go out heroically). I didn’t catch the assassin’s name at the time, but she is the Belter with the funky buns on her head. (I found out later her name is Sakai). 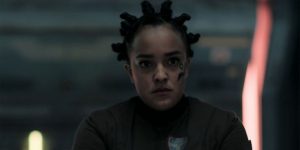 One of the coolest things in this episode was the robot that arrives shortly after Fred’s murder. It’s clearly of Mars design (not just because it’s a ridiculously bright red, but because Bobbie specifically referenced it as one of the stolen models in the first episode). The robot was quite the spectacle, as there was something menacing but also clinical about how it proceeded to complete its objectives despite all the firepower thrown at it.

Obviously, the most pressing concern is what the terrorists are going to do with the protomolocule, but I’m also left wondering: Sakai was the one who was working on the Roci. Did she sabotage it somehow?

We only get a few minutes with the Martian duo but it’s a hard-hitting conversation surrounding emotional stamina and how long people can be expected to grieve. Bobbie seems to think there’s a finite amount of emotion one can shed before you’re tapped out, but how much of that is her refusing to grieve for all the loss she’s experienced in the last few years?

I also thought the concept of a failed colony was interesting; not often in science fiction are we given a depiction of a colony in the midst of collapse like the one on Mars. It’s clear it isn’t self-sustaining enough to survive in the long run. At what point do we throw in the towel? And at what cost? As usual, Avasarala’s anger is a sight to behold. Her fury at the preventable destruction, and her ability to circumvent being black-walled, is nothing short of amazing.

Now that most of the UN is dead, will Avasarala be next in line for succession? (I hope so).

She really only rocked one outfit this episode, but her severe blue suit with the necklace of giant blue-hued orbs seemed symbolically chosen to show support of her hurting blue planet.

Unaware of the destruction, Amos has traveled to a UN prison in Chesapeake to visit Clarissa Mao. Her character hails from way back in Season 3 (she was the one posing as a technician setting up explosions on various ships in an attempt to frame Holden out of revenge for her father’s downfall). Long story short she changes her mind and helps to open the ring gates, but is brought to jail for her crimes. She is kept in solitary confinement, her adrenaline-boosting implant suppressed. Why is Amos visiting her? At the end of Season 3, he and Clarissa forge a connection. They seem to understand one another’s nihilist and morally gray worldview.

And while that crack that appears in the ceiling definitely isn’t a good thing – especially given how far down they were in the jail – it also means they might escape together. After shipping Amos with so many characters over the seasons, maybe this one will finally pan out for me.

Naomi and the Free Navy

At quite a physical distance from the calamity on Earth, but also at the heart of it, is Marcos Inaros and his Free Navy. Naomi is brought to him by her son. Inaros clearly relishes telling her that Filip was instrumental in obtaining the stealth tech from Mars that covered the asteroids. Inaros then goes ahead and basically claims that Naomi’s abandonment of Filip was what made him a terrorist, refusing to admit he had likely groomed his son from a young age to be such. Filip still cares about his mother (as conflicted a love as it is); if he felt nothing for her, he wouldn’t have brought her along. I still believe he will try to convince her to join the Free Navy. Naomi’s anguish at Filip’s involvement in the mass murder is paired with Marcos’ triumphant gloating. This made for great contrast and a heartbreaking end to the episode. What is next for the galaxy now that Marcos has the upper hand at almost all angles? Will he stick with his determination to colonize the ring worlds fairly, as he claims? I doubt it.

And given the degradation of Mars (both economically and militarily), perhaps they were supplying the Free Navy with the weapons as a way to secure a future for their planet under Belter rule? Perhaps the “explosion on Mars” that Alex and Bobbie mention is some sort of double-crossing by Inaros? Or a military coup on Mars by Babbage and crew?

This episode left a lot to think about and opened up even more intrigue. How much of Earth is destroyed? What’s going on with Mars? Will some Belters side with the Inners in sympathy and will a galactic civil war begin?

The Expanse usually has interesting episode titles, but what is Gaugamela? For those who aren’t up on Ancient battle history, this episode is named for the Battle of Gaugamela in 331 BCE, where Alexander the Great defeated Darius III of Persia. He won by forming his units into a giant wedge to blast through the opposing army’s defenses. Clearly, the wedge here is the asteroid. The title name is also notable as this battle led to the fall of Darius’ empire. Is this a reference to the fall of Earth’s empire over the galaxy?

Tags: amazon prime, asteroid, Gaugamela, sci-fi, The Expanse
No event found!
Load More
Subscribe To Our Calendar With Your Google Account
Select And Add Upcoming Events To Your Phone's Calendar