We begin with Larry, one of our major players, on the day he and his caravan drive the last leg of their journey from the east to Boulder. We also meet Joe and Nadine, who are a big part of Larry’s later story. They arrive and Stu Redman immediately takes Larry to see Mother Abigail: they’ve been waiting for him & his crew. We flash back to Larry at the beginning of the outbreak, about to go onstage, but his band is all out sick. His mom has shown up for the gig as well, reproaches him backstage for drinking, then begins coughing. He’s just about to begin his set when his ex-roommate, Wayne Stucky shows up and they get into a huge fight onstage. The next day we find Larry waking up with some random one-night stand, getting the call his mother’s in the hospital, which by then is totally overrun, patients are dying in the halls (very close to home in 2020). He takes her back home to die instead, and finds Wayne waiting for him, also sick, and still angry, but without much fight. Larry discovers a giant duffel back of blow in the trunk of Wayne’s car. The next day, Larry wakes up (sleeping on the bag of blow) on a bench in Central park, wanders around and encounters a few other immunes, most notably Rita Blakemoor.

They hit it off and he goes home with her. They decide to leave New York the next day and after a harrowing en-counter with some other immunes (offering Larry 1 million dollars for 15 minutes with Rita, and a creepy series of flooded, underground sewage tunnels), finally manage to get out of the city. They’re camping under an overpass that night, and she talks about it being stupid to be alive when everyone else is gone… “like being the last ones to leave a party”. Larry goes to bed. Rita says she’s going to stay up for a bit, and ends up chasing handful after handful of pills down with a bottle of booze, presumably overdosing in the process.

Back in the “present” in Boulder, Stu is driving Larry to see Mother Abigail, as she declared him one of five people she wanted running the place. Stu asks him what he did “before”, wherein Larry alludes to the fact he wasn’t a great person. He mentions he followed Harold’s signs across the country. At their destination, we also meet supporting player Rae Brentner (in the book, it’s Ralph…looks like they’ve cast a native woman instead, good on them!) and briefly, major player Nick Andros (I hope we get Nick’s story in Episode 3), before Larry gets his audience with Mother Abigail…and without knowing what went down in their meeting,  we’re immediately thrown into Larry’s dream where both Randall Flagg and Mother Abigail appear.

Frannie takes Nadine and Joe on a tour through part of Boulder, and they discuss Joe, who is mostly nonverbal at this point, likely due to PTSD. Nadine, she finds out, is a teacher, and they will need teachers in the Free Zone. Larry, Joe and Nadine set up the house Joe and Nadine will reside in; Larry then decides to go visit Harold, and Joe goes with him. It’s a brief, awkward visit, Joe doesn’t seem to trust Harold.  Meanwhile, Nadine, alone at home, has discovered the game “Planchette” (a type of Ouija Board). It’s whispering to her from across the room, and she takes it off the shelf. So we learn something is obviously up with Nadine.

The other major character we’re introduced to, interspersed with Larry’s is Lloyd Henreid, arriving in prison to cheers from the other inmates after a well-publicized crime spree…flash further back to the final event in the crime spree with his deranged friend Poke, and we find out Lloyd isn’t really a killer so much as a low level crook, when, as they hold up a convenience store, Poke starts shooting people, and threatens to shoot Lloyd if he doesn’t shoot the clerk. This is when the cops roll in, Poke kills a cop and then is himself killed, and Lloyd ends up stuck with Poke’s murder rap, though he hasn’t actually killed anyone.

Lloyd rides out the end of the world in a prison cell where his cellmate gets sick and dies, and the few guards are not interested in giving him food, water or letting this “cop killer” out. Later on, as he grows hungrier, he tries to kill a rat outside his cell, and keeps eyeing the calf of his now-deceased cellmate. In a distant cell someone keeps crying “Mother!” Finally, (a week later? A month?) the prison is totally quiet and deserted and a blurry someone is roaming the halls of the prison, reciting the lyrics to “Olly Olly Oxen Free”, and slowly approaching Lloyd’s cell. Here, finally, we make Flagg’s acquaintance and see his face as he says “Boo!” Lloyd, starving, believes it’s a hallucination. After a few moments of torturing Lloyd with descriptions of what he just ate for lunch, Flagg transforms one of his black stones with red flaws into a key and says he’ll let Lloyd out if he promises to be loyal. He lets Lloyd out and vies him the key, which promptly turns back into a rock, and says he’s going to make Lloyd his “right-hand man”.

I’m starting to get the impression this serialized version of The Stand’s “thing” will be jumping around a lot in time, as there was MUCH more of it this episode. Perhaps it’ll move to a more linear tale once all the major players are introduced and we’ve gotten through their backstories? I don’t mind the non-linear structure myself, but again, wonder if it’s confusing to those who aren’t as familiar with King’s source material.

It should be said: In all the pre-Boulder, Larry flashbacks, this series paints him as someone with some mild substance abuse issues  (another departure from the book, where, though he partakes of the occasional drink & drug binge, his biggest vice is being a self-interested asshole). Not sure if this makes it easier for the creators and less confusing for viewers, but I’ll wait to see how it plays out, as long as his redemption arc remains noteworthy… because in the book, you don’t like Larry so much at first, and grow to love him by the end, and it would be a shame for viewers to get a watered-down version.

For the record, I generally can’t STAND Heather Graham, but she NAILS Rita: the sparkling conversation, the slightly vacant look in her eyes, her overall fragility, though she tries to appear strong…her story is over by the end of the episode, but she was so good as Rita I hope we get more flashbacks. Her final scene this episode is heartbreaking.

At least they didn’t hybridize Rita and Nadine, like they did in the original miniseries, which was a HUGE misstep. But another thing I’ve gotta question is the omission of the Lucy character, who in the book, arrives in Boulder with Larry and Nadine. Since she’s also a huge part of Larry and Nadine’s character arcs, I’m sure hoping she still shows up in some capacity.

Also, we don’t see Joe and Nadine meeting Mother Abigail when they first arrive, which is a memorable moment in the books. But with all the jumping around, maybe that’ll happen later as well?

One thing I have really appreciated during both episodes so far – is how they are setting up the Dark Man. Until the last scene in episode two, we’ve only gotten little snippets of him in dreams, in whispers, a far-off hitchhiker here, a bootheel in the door there, a quick mug in the backseat – and in this lead up to the official introduction of Randall Flagg, the camera pans down so we first see his scuffed boots, his worn jeans, his belt buckle, jacket with smiley face patch winking at Lloyd, before that first “Boo!”. It’s effective and creepy at setting him up as the magnetic villain.

Also, while I LOVED Skarsgård in TrueBlood, when I heard news of his casting in The Stand, I thought he was too pretty to play Flagg, who in the novel, is someone you might pass over in a crowded room, or might look like your best friend, depending on the circumstance. I would picture someone more like a Matt Damon (who is extremely chameleonlike) than Aleksander Skarsgård, who is definitely not  a face that’d blend into a crowd, indeed, Lloyd even says, “You’re a beautiful fella”. That said, I’ve so far enjoyed his portrayal, and can’t wait to see him in action once he sets up his stronghold in the West.

All that said, I must say I mostly enjoyed this episode as well, and it receives another B+. 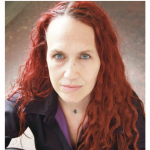 In addition to being obsessed with postapocalyptic books, television & film, Carolynne is a theatre "slash" artist (actor/playwright/producer/graphic designer) living in Seattle, who's even written a few postapocalyptic stage plays...find out more at www.carolynnewilcox.com.